Ever since man learned to use edged tools he has made ladders or steps, or whatever you may call them, by notching logs (Figs. 169 and 170). 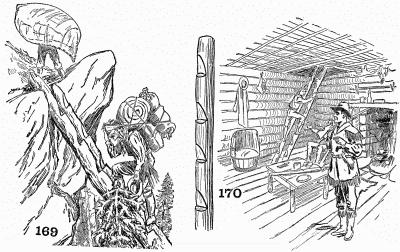 A few years ago I took a splendid trip among the unnamed lakes and in what is known as "the unexplored country"—that is, the unmapped country of northwestern Quebec. We travelled over trails that had not been changed by man since canoes were invented. The forests were untouched by the axe of the white man. There were no roads, no houses, no fences, no people except a few wandering Indians, no cattle except caribou and moose, no dogs except wolves, and we slept at night on beds of balsam and paddled by day through rivers and lakes or carried our luggage and our canoes over the portages from one body of water to another over centuries-old trails. At one place the trail led up the side of a mountain to the beetling face of a cliff—a cliff that we had to climb with all our canoes and luggage, and we climbed it on a couple of notched logs, as shown in Fig. 169. By the way, boys, the Indian with the big load on his back is my old friend Bow-Arrow, formerly chief of the Montainais, and the load on his back was sketched from the real one he carried up that ladder portage. This old man was then sixty years of age. But all this talk is for the purpose of telling you the use of the notched log. Our pioneer ancestors used them to ascend to the loft over their cabins where they slept (Fig. 170). It is also a good ladder to use for tree-houses and a first-rate one for our underground hogans when we have an entrance through the top instead of one at the side shown by Fig. 156. Since you have learned how to use the axe you may make one of these primitive ladders to reach the hay-loft in your barn, if you have a barn. You may make the ladder of one log if you set the pole or log upright and notch it on both sides so that you can clasp it with your hand and, placing one foot on each side of it, climb up in that manner.