If my present reader happens to be a Boy Scout or a scout-master who wants the scouts to build a tower for exhibition purposes, he can do so by following the directions here given, but if there is real necessity for haste in the erection of this tower, of course we cannot build one as tall as we might where we have more time. With a small tower all the joints may be quickly lashed together with strong, heavy twine, rope, or even wire; and in the wilderness it will probably be necessary to bind the joints with pliable roots, or cordage made of bark or withes; but as this is not a book on woodcraft we will suppose that the reader has secured the proper material for fastening the joints of the frame of this signal-tower and he must now shoulder his axe and go to the woods in order to secure the necessary timber. First let him cut eight straight poles—that is, as straight as he can find them. These poles should be about four and one half inches in diameter at their base and sixteen and one half feet long. After all the branches are trimmed off the poles, cut four more sticks each nine feet long and two and a half or three inches in diameter at the base; when these are trimmed into shape one will need twenty six or seven more stout sticks each four and one half feet long for braces and for flooring for the platform.

It being supposed that your timber is now all in readiness at the spot where you are to erect the tower, begin by laying out on the ground what we call the "kite frame." First take three of the four-and-one-half-foot sticks, A, B, C (Fig. 82), and two of the nine-foot sticks D and E (Fig. 82), and, placing them on a level stretch of ground, arrange them in the form of a parallelogram. Put A for the top rail at the top of the parallelogram and C for the bottom of the parallelogram and let them rest upon the sides D and E, but put B under the sides D and E. In order to bind these together securely, the ends of all the sticks must be allowed to project a few inches. B should be far enough below A to give the proper height for a railing around the platform. The platform itself rests upon B. A forms the top railing to the fence around it.

Now take two of your sixteen-and-one-half-foot poles and place them diagonally from corner to corner of the parallelogram with the small ends of the poles lying over the ends of A and the butt ends of the poles extending beyond C, as in Fig. 82. Lash these poles securely in place.

Where the poles cross each other in the X, or centre, it is best to flatten them some by scoring and hewing with a hatchet, but care must be taken not to weaken them by scoring too deep. Next take your lash rope, double it, run the loop down under the cross sticks, bring it up on the other side, as in Fig. 83, then pull the two loose ends through the loop. When they are drawn taut (Fig. 84), bend them round in opposite directions—that is, bend the right-hand end of the rope to the right, down and under the cross sticks, pull it out to the left, as in Fig. 84, then bend the left-hand piece of rope to the left, down and under, pulling it out to the right, as in Fig. 84. Next bring those two pieces up over and tie them together in a square knot, as shown in Figs. 85 and 86. 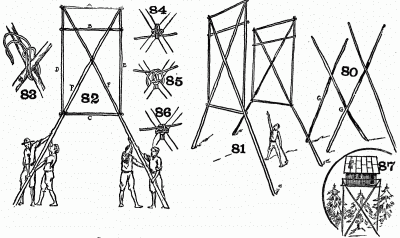 Parts of tower for a wireless, a game lookout, an elevated camp or cache.

Make a duplicate "kite" frame for the other side exactly as you made the first one, and then arrange these two pieces on the ground with the cross sticks F and F on the under-side and with their butt ends opposite the butts of the similar poles on the other frame and about five feet apart. Fasten a long line to the point where the two F pieces cross each other and detail a couple of scouts to hold each of the butt ends from slipping by placing one of their feet against the butt, as in Fig. 82, while two gangs of men or boys pull on the ropes and raise the kite frames to the positions shown in Figs. 81 and 88.

Be careful, when raising the frames, not to pull them too far so that they may fall on some unwary workman. When the frames are once erected it is an easy matter to hold them in place by guy-ropes fastened to stones, stakes, or trees or held by men or boys, while some of the shorter braces are fastened to hold the two kite frames together, as in Fig. 90, wherein you may see these short braces at the top and bottom. Next, the two other long sticks, legs, or braces (G, G, Figs. 89 and 90) should be held temporarily in position and the place marked where they cross each other in the centre of the parallelogram which should be the same as it is on the legs of the two kite frames. The G sticks should now be lashed together at the crossing point, as already described and shown by Figs. 83, 84, 85, and 86, when they may be put up against the sides, as in Fig. 89, in which diagram the G poles are made very dark and the kite frames indicated very lightly so as to better show their relative positions. Lash the G poles at the top and at the other points where they cross the other braces and secure the framework by adding short braces, as indicated in Fig. 90. 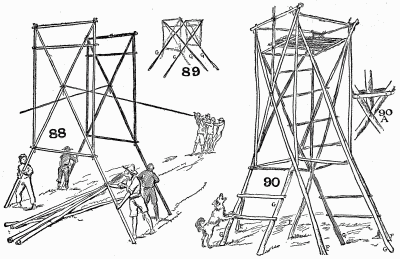 If all the parts are bound together with wire it will hold them more securely than nails, with no danger of the poles splitting. A permanent tower of this kind may be erected on which a camp may be built, as shown in Fig. 87. It may be well to note that in the last diagram the tower is only indicated by a few lines of the frame in order to simplify it and prevent confusion caused by the multiplicity of poles.

If you desire to make a tower taller than the one described it would be best, perhaps, to take the regular Boy-Scout dimensions as given by Scout-master A. G. Clarke:

When putting together this frame it may be nailed or spiked, but care must be used not to split the timber where it is nailed. With most wood this may be avoided by driving the spikes or nails several inches back of the ends of the sticks. To erect a flagpole or a wireless pole, cut the bottom of the pole wedge-shaped, fit in the space between the cross poles, as in Fig. 90 A, then lash it fast to the B and A pole, and, to further secure it, two other sticks may be nailed to the F poles, one on each side, between which the bottom of the flagpole is thrust, as shown by Fig. 90 A.

The flooring of the platform must be securely nailed or lashed in place, otherwise there may be some serious accident caused by the boys or men falling through, a fall of about twenty and one half feet according to the last measurements given for the frame.

An observatory of this kind will add greatly to the interest of a mountain home or seaside home; it is a practical tower for military men to be used in flag signalling and for improvised wireless; it is also a practical tower for a lookout in the game fields and a delight to the Boy Scouts.