If the reader has ever built little log-cabin traps he knows just how to build a Navajo hogan or at least the particular Navajo hogan shown by Figs. 148 and 150. This one is six-sided and may be improved by notching the logs (Figs. 162, 164, 165) and building them up one on top of the other, dome-shaped, to the required height. After laying some rafters for the roof and leaving a hole for the chimney the frame is complete. In hot countries no chimney hole is left in the roof, because the people there do not build fires inside the house; they go indoors to keep cool and not to get warm; but the Navajo hogan also makes a good cold-country house in places where people really need a fire. Make the doorway by leaving an opening (Fig. 150) and chinking the logs along the opening to hold them in place until the door-jamb is nailed or pegged to them, and then build a shed entranceway (Fig. 153), which is necessary because the slanting sides of the house with an unroofed doorway have no protection against the free entrance of dust and rain or snow, and every section of this country is subject to visits from one of these elements. The house is covered with brush, browse, or sod.

Fig. 152 shows how to make a log dugout by building the walls of the log cabin in a level place dug for it in the bank. Among the log cabins proper (Figs. 162 and 166) we tell how to notch the logs for this purpose. 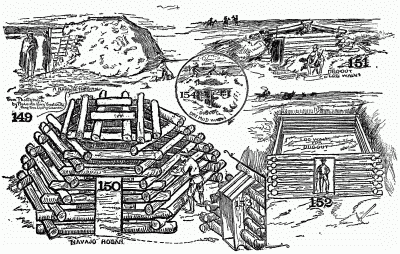 Forms of dugouts and mound shacks.

Fig. 151 shows one of these log dugouts which I have named the Hornaday from the fact that Doctor William Hornaday happens to be sitting in front of the one represented in the sketch. Fig. 154 shows a dugout with walls made of sod which is piled up like stones in a stone wall. The roofs of all these are very flat and made of logs (Figs. 54, 55, and 56), often with a log pegged to the rafters above the eaves to hold the sod. All such houses are good in dry countries, cold countries, and countries frequented by tornadoes or by winds severe enough to blow down ordinary camps.

The Navajo hogan is an easy sort of a house for boys to build because the lads may use small poles in place of logs with which to build the camp and thus make the labor light enough to suit their undeveloped muscles, but the next illustration shows how to build an American boy's hogan of milled lumber such as one can procure in thickly settled parts of the country.