In erecting the fireplace for your cabin the stone work should extend into the cabin itself, thus protecting the ends of the logs from the fire. The stone over the top of the fireplace (A, B, Fig. 274) rests upon two iron bars; these iron bars are necessary for safety because, although the stone A, B may bridge the fireplace successfully, the settling of the chimney or the heat of the fire is liable to crack the stone, in which case, unless it is supported by two flat iron bars, it will fall down and wreck your fireplace. The stone A, B in Fig. 275, has been cracked for fifteen years but, as it rests upon the flat iron bars beneath, the crack does no harm. 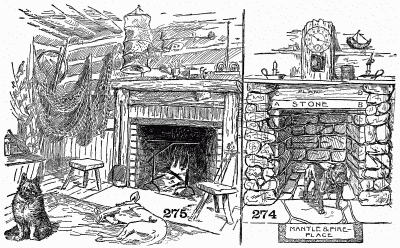 Fireplace in author's cabin, and suggestion for stone and wood mantel.

In Fig. 274 (the ends of the fireplace) the two wing walls of it are built up inside the cabin to support a plank for a mantelpiece. Another plank C, D is nailed under the mantelpiece against the log before the stone work is built up. This is only for the purpose of giving a finish to your mantelpiece. The hearth in Fig. 274 is made of odd bits of flat stones laid in cement, but the hearth in Fig. 275 is one big slab of bluestone just as it came from the quarry, and the fireplace in Fig. 275 is lined with fire-brick. The two three-legged stools which you see on each side were made by the woodsmen who built the cabin to use in their camp while the cabin was being erected. The stools have occupied the position of honor on each side of the fireplace now for twenty-seven years. The mantelpiece in this drawing is made of puncheons with the rounded side out on the two supports and the flat side against the wall; of course, for the mantel itself, the rounded side must be down and the flat side up. This fireplace has been used for cooking purposes and the crane is still hanging over the flames, while up over the mantel you may see, roughly indicated, a wrought-iron broiler, a toaster, and a brazier. The flat shovel hanging to the left of the fireplace is what is known as a "peal," used in olden times to slip under the pies or cakes in the old-fashioned ovens in order to remove them without burning one's fingers.