Shelters, Shacks, and Shanties > How to Build a Fireplace & Chimney for a Simple Log Cabin


How to Build a Fireplace & Chimney for a Simple Log Cabin

Fig. 269 shows a simple form of fireplace which is practically the granddaddy of all the other fireplaces. It consists of three walls for windbreaks, laid up in stone or sod against some stakes driven in the ground for the purpose of supporting them. The four-cornered stakes are notched or forked and small logs are laid horizontally in these forks and on top of this a pyramidal form of a log pen is built of small logs and billets, and this answers the purpose of a chimney. This style of fireplace is adapted to use in camps and rude shacks like those shown by Figs. 187, 189, 191, and 192; also for the most primitive log cabins, but when we make a real log house we usually plan to have a more elaborate or more finished fireplace and chimney. The ground-plan of Fig. 269 is shown by Fig. 270.

Here you see there is a mud hearth, a wall of clay plastered over the stones of the fireplace. This will prevent the fire from cracking and chipping the stones, but clay is not absolutely necessary in this fireplace. When, however, you build the walls of your fireplace of logs and your chimney of sticks the clay is necessary to prevent the fire from igniting the woodwork and consuming it. For a log-framed fireplace, make a large opening in the wall of your house and against the ends of the logs where you sawed out the opening, erect jamb pieces of planks two or three inches thick running up to the log over the fireplace and spiked to the round ends of the logs (see plan, Fig. 272). Next, lay your foundation of sill logs on the fireplace, first two side logs and then a back log, neatly notched so as to look like the logs in the walls of the cabin. Build your fireplace walls as shown by Fig. 271, after which take your mud or clay and make the hearth by hammering the clay down hard until you have a firm, smooth foundation. The front hearth may be made, as shown in the diagram, of stones of any size from pebbles to flagstones, with the surfaces levelled by sinking the under-part down into the clay until a uniform level is reached on top. The fireplace may be built with bricks of moist clay and wet clay used for mortar. Make the clay walls of the fireplace at least one foot thick and pack it down hard and tight as you build it. If you choose you may make a temporary inside wall of plank as they do when they make cement walls, and then between the temporary board wall and the logs put in your moist clay and ram it down hard until the top of the fireplace is reached, after which the boards may be removed and the inside of the fireplace smoothed off by wiping it with a wet cloth.

After the walls of logs and clay are built to top of the fireplace proper, split some sticks and make them about one inch wide by one and one half inch thick, or use the round sticks in the form in which they grow, but peel off the bark to render them less combustible; then lay them up as shown by Fig. 261, log-cabin style. With the chimney we have four sides to the wall in place of three sides as in the fireplace. The logs of the fireplace, where they run next to the cabin, may have to be chinked up so as to keep them level, but the chimney should be built level as it has four sides to balance it. Leave a space between the chimney and the outside wall and plaster the sticks thickly with clay upon the outside and much thicker with clay upon the inside, as shown by Fig. 271 A, which is supposed to be a section of the chimney. 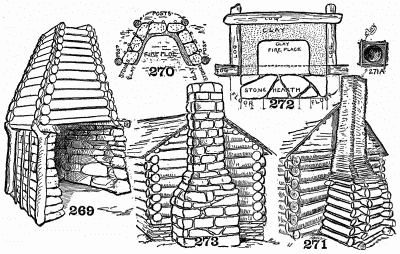 Detail for fireplaces and flues.

All through the mountains of East Tennessee and Kentucky I have seen these stick chimneys, some of them many, many years old. In these mountain countries the fireplaces are lined with stones, but in Illinois, in the olden times, stones were scarce and mud was plenty and the fireplaces were made like those just described and illustrated by Fig. 272.

The stone chimney is an advance and improvement upon the log chimney, but I doubt if it requires any more skill to build.

Dig your foundation for your fireplace and chimney at least three feet deep; then fill the hole up with small cobblestones or broken bluestone until you have reached nearly the level of the ground; upon this you can begin to lay your hearth and chimney foundation. If you fail to dig this foundation the frost will work the ground under your chimney and the chimney will work with the ground, causing it either to upset or to tilt to one side or the other and spoil the looks of your house, even if it does not put your fireplace out of commission.

In laying up the stones for your chimney, remember that it makes no difference how rough and uneven it is upon the outside. The more uneven the outside is the more picturesque it will appear, but the smoother and more even the inside is the less will it collect soot and the less will be the danger of chimney fires. Lay your stones in mortar or cement. See that each stone fits firmly in the bed and does not rock and that it breaks joints with the other stone below it. By breaking joints I mean that the crack between the two stones on the upper tier should fit over the middle of the stone on the lower tier; this, with the aid of the cement, locks the stones and prevents any accidental cracks which may open from extending any further than the two stones between which it started. If, however, you do not break joints, a crack might run from the top to the bottom of the chimney causing it to fall apart. Above the fireplace make four walls to your chimney, as you did with your stick chimney (Fig. 271), and let the top of the chimney extend above the roof at least three feet; this will not only help the draught but it will also lessen the danger of fire.