Shelters, Shacks, and Shanties > How to Make Fallen-Tree and Scout-Master Shelters

Now that you know how to make a bed in a half cave, we will take up the most simple and primitive manufactured shelters.

For a one-man one-night stand, select a thick-foliaged fir-tree and cut it partly through the trunk so that it will fall as shown in Fig. 11; then trim off the branches on the under-side so as to leave room to make your bed beneath the branches; next trim the branches off the top or roof of the trunk and with them thatch the roof. Do this by setting the branches with their butts up as shown in the right-hand shelter of Fig. 13, and then thatch with smaller browse as described in making the bed. This will make a cosey one-night shelter.

Or take three forked sticks (A, B, and C, Fig. 12), and interlock the forked ends so that they will stand as shown in Fig. 12. Over this framework rest branches with the butt ends up as shown in the right-hand shelter (Fig. 13), or lay a number of poles as shown in the left-hand figure (Fig. 12) and thatch this with browse as illustrated by the left-hand shelter in Fig. 13, or take elm, spruce, or birch bark and shingle as in Fig. 14. These shelters may be built for one boy or they may be made large enough for several men. They may be thatched with balsam, spruce, pine, or hemlock boughs, or with cat-tails, rushes (see Figs. 66 and 69) or any kind of long-stemmed weeds or palmetto leaves.

In the first place, I trust that the reader has enough common sense and sufficient love of the woods to prevent him from killing or marring and disfiguring trees where trees are not plenty, and this restriction includes all settled or partially settled parts of the country. But in the real forests and wilderness, miles and miles away from human habitation, there are few campers and consequently there will be fewer trees injured, and these few will not be missed.

To get the birch bark, select a tree with a smooth trunk devoid of branches and, placing skids for the trunk to fall upon (Fig. 38), fell the tree (see Figs. 112, 113, 114, 115, 116, 117, and 118), and then cut a circle around the trunk at the two ends of the log and a slit from one circle clean up to the other circle (Fig. 38); next, with a sharp stick shaped like a blunt-edged chisel, pry off the bark carefully until you take the piece off in one whole section. If it is spruce bark or any other bark you seek, hunt through the woods for a comparatively smooth trunk and proceed in the same manner as with the birch. To take it off a standing tree, cut one circle down at the butt and another as high as you can reach (Fig. 118) and slit it along a perpendicular line connecting the two cuts as in Fig. 38. This will doubtless in time kill the tree, but far from human habitations the few trees killed in this manner may do the forest good by giving more room for others to grow. Near town or where the forests are small use the bark from the old dead trees. 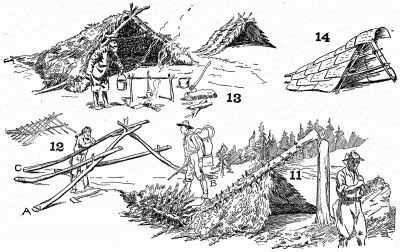 One-night shelter. The fallen tree and the scout-master.

To shingle with bark, cut the bark in convenient sections, commence at the bottom, place one piece of bark set on edge flat against the wall of your shelter, place a piece of bark next to it in the same manner, allowing the one edge to overlap the first piece a few inches, and so on all the way around your shack; then place a layer of bark above this in the same manner as the first one, the end edges overlapping, the bottom edges also overlapping the first row three or four inches or even more. Hold these pieces of bark in place by stakes driven in the ground against them or poles laid over them, according to the shape or form of your shelter. Continue thus to the comb of the roof, then over the part where the bark of the sides meets on the top lay another layer of bark covering the crown, ridge, comb, or apex and protecting it from the rain. In the wigwam-shaped shelters, or rather I should say those of teepee form, the point of the cone or pyramid is left open to serve as chimney for smoke to escape.