Shelters, Shacks, and Shanties > How to Build Elevates Shacks, Shanties, and Shelters


How to Build Elevates Shacks, Shanties, and Shelters

For many reasons it is sometimes necessary or advisable to have one's camp on stilts, so to speak. Especially is this true in the more tropical countries where noxious serpents and insects abound. A simple form of stilted shack is shown by Fig. 63. To build this shack we must first erect an elevated platform (Fig. 64). This is made by setting four forked sticks of equal height in the ground and any height from the ground to suit the ideas of the camp builder. If, for some reason, the uprights are "wabbly" the frame may be stiffened by lashing diagonal cross sticks to the frame. After you have erected the four uprights, lay two poles through the crotches, as in Fig. 64, and make a platform by placing other poles across these, after which a shelter may be made in the form of an open Adirondack camp or any of the forms previously described. Fig. 65 shows the framework for the open camp of Adirondack style with the uprights lashed to the side bars; if you have nails, of course, you can nail these together, but these plans are made on the assumption that you have no nails for that purpose, which will probably be true if you have been long in the woods. 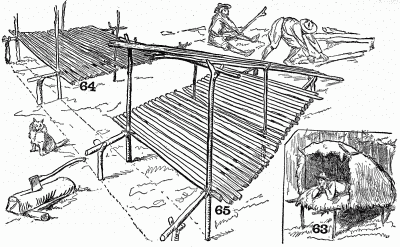 A simple stilt camp.
Back to Shelters, Shacks, and Shanties