Shelters, Shacks, and Shanties > How to Build Gateways


How to Build Gateways

The great danger with rustic work is the temptation, to which most builders yield, to make it too fancy and intricate in place of practical and simple. Figs. 323, 324, 325, and 326 are as ornamental as one can make them without incurring the danger of being overdone, too ornate, too fancy to be really appropriate. 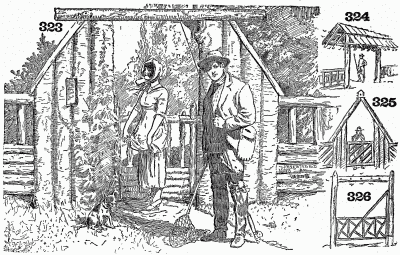 Which would you rather do or go fishing? Suggestions for log gates.

Which Would You Rather Do or Go Fishing?

Fig. 328 is a gate made of upright logs with bevelled tops protected by plank acting as a roof, and a flattened log fitting across the top. The gate and fence, you may see, are of simple construction; horizontal logs for the lower part keep out small animals, upright posts and rails for the upper part keep out larger animals and at the same time do not shut out the view from the outside or the inside of the enclosure. Fig. 324 shows a roof gateway designed and made for the purpose of supplying building sites for barn swallows or other useful birds. The fence for this one is a different arrangement of logs, practical and not too fancy. Fig. 325 shows a modification of the gate shown by Fig. 323; in this one, however, in place of a plank protecting bevelled edges of the upright logs, two flattened logs are spiked on like rafters to a roof, the apex being surmounted by a bird-house. Fig. 326 shows another gateway composed of two upright logs with a cross log overhead in which holes have been excavated for the use of white-breasted swallows, bluebirds, woodpeckers, or flickers. Fig. 327 is another simple but picturesque form of gateway, where the cross log at the top has its two ends carved after the fashion of totem-poles. In place of a wooden fence a stone wall is shown. The ends of the logs (Fig. 327), which are embedded in the earth, should first be treated with two or three coats of creosote to prevent decay; but since it is the moisture of the ground that causes the decay, if you arrange your gate-posts like those shown in the vertical section (Fig. 328), they will last practically forever. Note that the short gate-post rests upon several small stones with air spaces between them, and pointed ends of the upright logs rest upon one big stone. The gate-post is fastened to the logs by crosspieces of board running horizontally from log to the post, and these are enclosed inside the stone pier so that they are concealed from view. This arrangement allows all the water to drain from the wood, leaving it dry and thus preventing decay. Fig. 329 shows another form of gate-post of more elaborate structure, surmounted by the forked trunk of a tree; these parts are supposed to be spiked together or secured in place by hardwood pegs.

Never forget to add the bird-house or bird shelter to every gateway you make; it is more important than the gate itself. In my other books I have described and told how to make various forms of bird-houses, including my invention of the woodpecker's house now being manufactured by many firms, including one in Germany, but the reader should make his own bird-houses. I am glad the manufacturers have taken up these ideas for the good they will do the birds, but the ideas were published first solely for the use of the boys in the hopes of educating them both in the conservation of bird life and in the manual training necessary to construct bird-houses. 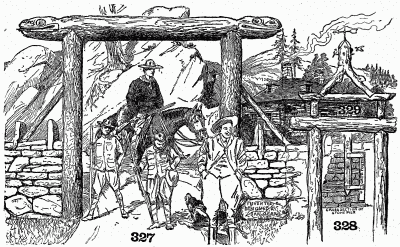 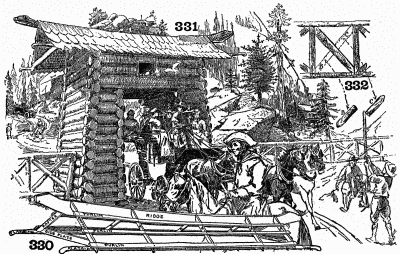 The reader must have, no doubt, noticed that the problems in this book have become more and more difficult as we approach the end, but this is because everything grows; as we acquire skill we naturally seek more and more difficult work on which to exercise our skill. These gateways, however, are none of them too difficult for the boys to build themselves. The main problem to overcome in building the picturesque log gateway shown by Fig. 331 is not in laying up the logs or constructing the roof—the reader has already learned how to do both in the forepart of this book—but it is in so laying the logs that the slant or incline on the two outsides will be exactly the same, also in so building the sides that when you reach the top of the open way and place your first overhead log, the log will be exactly horizontal, exactly level, as it must be to carry out the plan in a workmanlike manner. Fig. 330 shows you the framework of the roof, the ridge-pole of which is a plank cut "sway-backed," that is, lower in the centre than at either end. The frame should be roofed with hand-rived shingles, or at least hand-trimmed shingles, if you use the manufactured article of commerce. This gateway is appropriate for a common post-and-rail fence or any of the log fences illustrated in the previous diagrams. Fig. 332 shows how the fence here shown is constructed: the A logs are bevelled to fit in diagonally, the B and C logs are set in as shown by the dotted line in Fig. 332. A gateway like the one shown here would make a splendid and imposing one for a permanent camp, whether it be a Boy Scout, a Girl Pioneer, a private camp for boys, or simply the entrance to a large private estate.