Shelters, Shacks, and Shanties > How to Make Birch Bark or Tar Paper Shacks


How to Make Birch Bark or Tar Paper Shacks

A description of the Pontiac was first published in my "Field and Forest Handy Book," a book which contains several shelters similar to the ones here given, most of which were originally made for Caspar Whitney while he was editor of Outing.

The Pontiac, as here given, is my own design and invention (Fig. 36). It is supposed to be shingled with birch bark, but, as is the case with all these camps, other bark may be substituted for the birch, and, if no bark is within reach and you are near enough to civilization, tar paper makes an excellent substitute. Fig. 37 shows the framework of a Pontiac with a ridge-pole, but the ridge-pole is not necessary and the shack may be built without it, as shown in Figs. 36 and 39, where the rafter poles rest upon the two side-plates over which they project to form the apex of the roof. In Fig. 39, although the side-plates are drawn, the rafter or roof poles are not because the diagram is supposed to be a sort of X-ray affair to show the internal construction. The opening for smoke need not be more than half as large as it is in Fig. 39 and it may be covered up in inclement weather with a piece of bark so as to keep out the rain.

Fig. 38 shows a tree felled in order to procure bark. You will note that the bark is cut round at the bottom and at the top and a slit is made connecting the two cuts as already described so that the bark may be peeled off by running a blunt instrument or a stick, whittled to the shape of a paper-cutter or dull chisel, under the edge of the bark and carefully peeling it back. If it is necessary to "tote" the bark any distance over the trail, Fig. 38 shows how to roll it up and how to bind the roll with cord or rope so that it may be slung on the back as the man is "toting" it in Fig. 36.

To build a Pontiac, first erect the uprights E and E, Fig. 37, then the other two similar uprights at the rear and lay the side-plates G in the forks of the uprights; next erect the upright H and one in the rear to correspond, and across this lay the ridge-pole. Next take a couple of logs and put them at the foot of the E poles, or, if you want more room, further back toward where the roof poles F will come. Place one of these logs on top of the other as shown in Figs. 36 and 39. Keep them in place by driving sticks on each side of them. Put two more logs upon the other side of the Pontiac and then lay your roof poles or rafters up against the side-plates and over the logs as shown in diagrams 36, 37, and 39. Fig. 36 shows the roof partially shingled and the sides partially covered, so that you may better understand how it is done.

Commence at the bottom and lay the first row with the edges overlapping for walls; for the roof you may lay one row of shingles from the bottom up to the ridge and hold them in place by resting a pole on them; then lay the next row of shingles alongside by slipping the edges under the first. When you have the two sides covered, put bark over the ridge as shown in Fig. 36. This will make a beautiful and comfortable little camp. 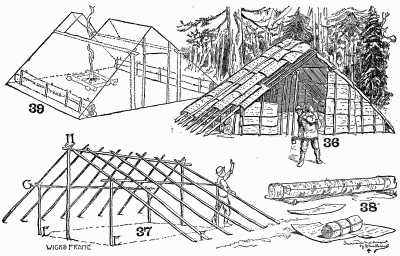 The Pontiac of birch bark.

To Keep Out Cold

Built as here described, the cold wind might come through in the winter-time, but if you can gather a lot of Sphagnum moss from the nearest swamp and cover your roof with it and then shingle that over with another layer of birch bark, the cold wind will not come through your roof. If you treat your side walls in the same manner and heap dirt up around the edges of them, you will have a comfortable winter camp.

In the winter-time you will find it very difficult to peel the birch bark or any other kind of bark, but when the sap is flowing it is not so difficult to secure bark slabs from many varieties of trees.