To further illustrate the use of bark and tar paper, I have made the sketches shown by Figs. 46, 47, and 48. Fig. 47 is a log shack with an arched roof drawn from a photograph in my collection. To keep the interior warm not only the roof but the sides of the house as well have been shingled with bark, leaving only the ends of the logs protruding to tell of what material the house is really constructed. Fig. 47 shows a fisherman's hut made with a few sticks and bark. Fig. 48 shows a tar paper camp, that is, a camp where everything is covered with tar paper in place of bark. The house is made with a skeleton of poles on which the tar paper is tacked, the kitchen is an open shed with tar paper roof, and even the table is made by covering the cross sticks shown in the diagram with sheets of tar paper in place of the birch bark usually used for that purpose.

Personally I do not like tar paper; it seems to rob the camp of a true flavor of the woods; it knocks the sentiment out of it, and, except to sailors, the odor of the tar is not nearly as delightful as that of the fragrant balsam boughs. Nevertheless, tar paper is now used in all the lumber camps and is spreading farther and farther into the woods as the birch bark becomes scarce and the "tote-roads" are improved.

When one can enter the woods with an automobile, you must expect to find tar paper camps, because the paper is easily transported, easily handled, and easily applied for the purpose of the camper. 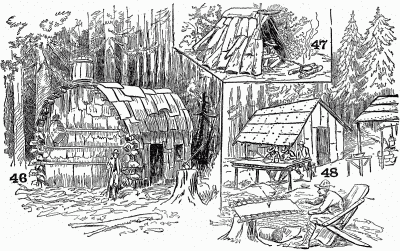 Showing use of bark and tar paper.

Practically any form of tent may be reproduced by tacking tar paper to sticks arranged in the proper manner, but if you make a wigwam of tar paper, do paint it red, green, or yellow, or whitewash it; do anything which will take off the civilized, funereal look of the affair.