How to Make a Wyoming Olebo, Shake Cabin, Canadian Mossback

One of the charms of a log-cabin building is the many possibilities of novelties suggested by the logs themselves. In the hunter's cabin (see Frontispiece) we have seen how the ends of the logs were allowed to stick out in front and form a rail for the front stoop; the builders of the olebos have followed this idea still further.

In Fig. 236 we see that the side walls of the pen are allowed to extend on each side so as to enclose a roofed-over open-air room, or, if you choose to so call it, a front porch, veranda, stoop, piazza, or gallery, according to the section of the country in which you live.

So as to better understand this cabin the plan is drawn in perspective, with the cabin above and made to appear as if some one had lifted the cabin to show the ground-floor plan underneath. The olebo roof is built upon the same plan as the Kanuck (Fig. 244), with this exception, that in Fig. 244 the rooftree or ridge-log is supported by cross logs which are a continuation of the side of the house (A, A, Figs. 242, 244, and 245), but in the olebo the ridge pole or log is supported by uprights (Figs. 236 and 237). To build the olebo lay the two side sill logs first (A, B, and C, D, Fig. 236), then the two end logs E, F, and D, B and proceed to build the cabin as already described, allowing the irregular ends of the logs to extend beyond the cabin until the pen is completed and all is ready for the roof, after which the protruding ends of the logs excepting the two top ones may be sawed off to suit the taste and convenience of the builder. The olebo may be made of any size that the logs will permit and one's taste dictate. After the walls are built, erect the log columns at A and C (Fig. 236), cut their tops wedge shape to fit in notches in the ends of the projecting side-plates (Fig. 144, A and B); next lay the end plate (G, Fig. 236) over the two top logs on the sides of your house which correspond to the side-plates of an ordinary house. The end plate G is notched to fit on top of the side-plates, and the tops of the side-plates have been scored and hewn and flattened, thus making a General Putnam joint like the one shown above (G, Fig. 236); but when the ends of the side logs of the cabin were trimmed off the side-plates or top side logs were allowed to protrude a foot or more beyond the others; this was to give room for the supporting upright log columns at A and C (see view of cabin, Fig. 236 and the front view, Fig. 237). H and J (Fig. 237) are two more upright columns supporting the end plate which, in turn, supports the short uprights upon which the two purlins L and M rest; the other purlins K and N rest directly upon the end plate (Fig. 237). The rear end of the cabin can have the gable logged up as the front of the house is in Fig. 240, or filled in with uprights as in Fig. 247. The roof of the olebo is composed of logs, but if one is building an olebo where it will not be subjected during the winter to a great weight of snow, one may make the roof of any material handy. 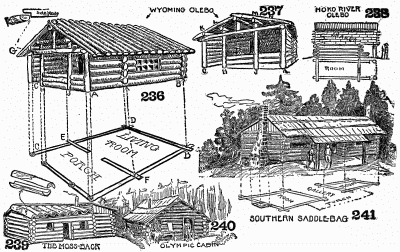 The Hoko River olebo has logs only up to the ceiling of the first story (Fig. 238), or the half story as the case may be; this part, as you see, is covered with shakes previously illustrated and described (Figs. 127, 128, 129, and 130). The logs supporting the front of the second story serve their purpose as pillars or supports only during the winter-time, when the heavy load of snow might break off the unsupported front of the olebo. In the summer-time they are taken away and set to one side, leaving the overhang unsupported in front. The shakes on the side are put on the same as shingles, overlapping each other and breaking joints as shown in the illustration. They are nailed to the side poles, the ends of which you may see protruding in the sketch (Fig. 238).

Fig. 239 shows a mossback's house or cabin in the lake lands of Canada. The same type of house I have seen in northern Michigan. This one is a two-pen house, but the second pen is made like the front to the olebo, by allowing the logs of the walls of the house itself to extend sufficient distance beyond to make another room, pen, or division. In this particular case the settler has put a shed roof of boards upon the division, but the main roof is made of logs in the form of tiles. In Canada these are called les auges (pronounced ōge), a name given to them by the French settlers. The back of this house has a steeper roof than the front, which roof, as you see, extends above the ends of les auges to keep the rain from beating in at the ends of the wooden troughs. Above the logs on the front side of the small room, pen, or addition the front is covered with shakes. Fig. 240 shows a cabin in the Olympic mountains, but it is only the ordinary American log cabin with a shake roof and no windows. A cooking-stove inside answers for heating apparatus and the stovepipe protrudes above the roof.

Now we come to the most delightful of all forms of a log house. The one shown in Fig. 241 is a very simple one, such as might be built by any group of boys, but I have lived in such houses down South that were very much more elaborate. Frequently they have a second story which extends like the roof over the open gallery between the pens; the chimneys are at the gable ends, that is, on the outside of the house, and since we will have quite a space devoted to fireplaces and chimneys, it is only necessary to say here that in many portions of the South the fireplaces, while broad, are often quite shallow and not nearly so deep as some found in the old houses on Long Island, in New York, and the Eastern States. The open gallery makes a delightful, cool lounging place, also a place for the ladies to sit and sew, and serves as an open-air dining-room during the warm weather; this sort of house is inappropriate and ill fitted for the climate which produced the olebo, the mossback, and the Kanuck, but exactly suited for our Southern States and very pleasant even as far north as Ohio, Indiana, and Illinois. I have lived in one part of every summer for the last twenty-two years in the mountains of northern Pennsylvania. The saddle-bag may be built by boys with the two rooms ten by ten and a gallery six feet wide, or the two rooms six by six and a gallery five feet wide; the plan may be seen on the sketch below the house (Fig. 241).

Where you only expect to use the house in the summer months, a two-pen or saddle-bag can be used with comfort even in the Northern States, but in the winter-time in such States as Michigan and part of New York, the gallery would be filled up with drifting snow.