While the ingenuity of the white man may make improvements upon the wick-ups, arbors, huts, and shelters of the native red man, we must not forget that these native shelters have been used with success by the Indians for centuries, also we must not forget that our principal objection to many of them lies in the fact that they are ill ventilated and dirty, both of which defects may be remedied without materially departing from the lines laid down by the savage architects. The making of windows will supply ventilation to Indian huts, but the form of the hut we must bear in mind is made to suit the locality in which we find it.

The White Mountain Apache builds a tent-shaped shack (Figs. 29 and 32) which is practically the same as that already described and shown in Figs. 18 and 19, the difference being that the Apache shack is not covered with birch bark, a material peculiar to the North, but the Apache uses a thatch of the rank grass to be found where his shacks are located. To-day, however, the White Mountain Apache has become so degenerate and so lost to the true sense of dignity as a savage that he stoops to use corn-stalks with which to thatch the long, sloping sides of his shed-like house but by so doing he really shows good horse sense, for corn-stalks and corn leaves make good material for the purpose. 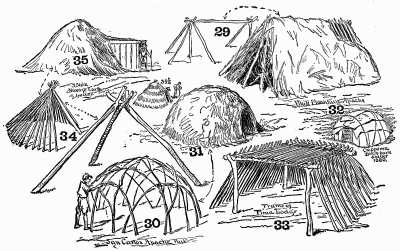 The San Carlos Apache Indians build a dome-shaped hut by making a framework of small saplings bent in arches as the boys did in Kentucky when the writer was himself a lad, and as shown in Fig. 30. The ends of the pole are sunk into the ground in the form of a circle, while their tips are bent over and bound together thus forming a series of loops which overlap each other and give stability and support to the principal loops which run from the ground to the top of the dome. The Indians thatch these huts with bear-grass arranged in overlapping rows and held in place with strings (see Fig. 69) made of yucca leaves (Fig. 31).

Much farther north I have seen the Chippewa Indians build a framework in practically the same manner as the San Carlos Apache, but the Chippewas covered their frame with layers of birch bark held in place by ropes stretched over it as shown in Fig. 32. The door to their huts consisted of a blanket portière.

In the same locality to-day it would be difficult if not impossible to procure such large strips of birch bark; but the dome-shaped frame is a good one to be used in many localities and, like all other frames, it can be covered with the material at hand. It may be shingled with smaller pieces of bark, covered with brush and thatched with browse or with hay, straw, palmetto leaves, palm leaves, or rushes, or it may be plastered over with mud and made an adobe hut.

The Pima Indians make a flat-roofed lodge with slanting walls (Fig. 33) which may be adapted for our use in almost any section of the country. It can be made warm and tight for the far North and cool and airy for the arid regions of the Southwest. The framework, as you may see by referring to the diagram, is similar to the wick-ups we men made when we were boys, and which are described in the "American Boy's Handy Book," consisting of four upright posts supporting in their crotches two crosspieces over which a flat roof is made by placing poles across. But the sides of this shack are not upright but made by resting leaning poles against the eaves.

The principal difference between a white man's architecture and the Indian's lies in the fact that the white man, with brick, stone, or frame house in his mind, is possessed of a desire to build perpendicular walls—walls which are hard to thatch and difficult to cover with turf, especially in the far North, where there is no true sod such as we understand in the middle country, where our grass grows thickly with interlacing roots. Boys will do well to remember this and imitate the Indian in making slanting walls for their shacks, shanties, and shelters in the woods. If they have boards or stone or brick or logs with which to build they may, with propriety, use a perpendicular wall. The Pima Indians, according to Pliny Earle Goddard, associate curator of anthropology of the American Museum of Natural History, thatch their houses with arrow brush and not infrequently bank the sides of the shack with dirt.

If you want to put a dirt roof on a shack of this description, cover the poles with small boughs or browse, green or dry leaves, straw, hay, grass, or rushes and put the sod over the top of this. If in place of making the roof flat, as shown in Fig. 33, you slant it so as to shed the rain, this sort of shack will do for almost any climate, but with a flat roof it is only fitted for the arid country or for a shelter from the sun when it is not expected to be used during the rain.

The teepee-shaped hut used by the Navajo Indians will shed the rain. To build this shack interlock three forked sticks as shown in the diagram, then lay other poles up against the forks of these sticks so that the butts of the poles will form a circle on the ground (Fig. 34). Thatch this with any material handy, after which you may cover it with dirt as the Navajos do, in which case you had better build a hallway for entrance, as shown in Fig. 35. This same teepee form is used by the California Indians and thatched with wild hay (Fig. 34½).