Sometimes it is desired to have a fireplace in the middle of the room. Personally, such a fireplace does not appeal to me, but there are other people who like the novelty of such a fireplace, and Fig. 276 shows one constructed of rough stones. The fireplace is high so that one tending it does not have to stoop and get a backache. The foundation should be built in the ground underneath the cabin and up through the floor. A flat stone covers the top of the fireplace, as in the other drawings. Fig. 277 shows a fireplace with a puncheon support for a plank mantel. 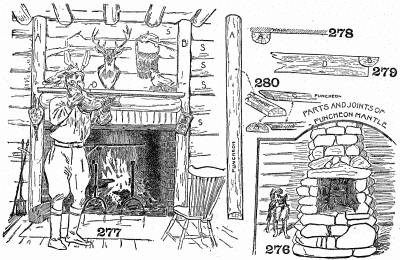 Fireplace and mantel of half logs. Also centre fireplaces for cabin.

A and B are two half logs, or puncheons, which run from the floor to the ceiling on each side of the fireplace. S, S, S are the logs of the cabin walls. C is the puncheon supporting the mantel and D is the mantel. Fig. 279 shows a section or a view of the mantel looking down on it from the top, a topographical view of it. Fig. 278 is the same sort of a view showing the puncheon A at the other end of the mantel before the mantel is put in place between the two puncheons A and B. In Fig. 279 the reader may see that it will be necessary to cut the corners out of the mantel-board in order to fit it around the puncheons A and B; also, since A and B have rounded surfaces, it will be necessary to so bevel the ends of the puncheon (C, Fig. 277) that they will fit on the rounded surfaces of A and B. Fig. 280 shows the end of C bevelled in a perspective view, and also a profile view of it, with the puncheon A indicating the manner in which C must be cut to fit upon the rounded surface. This makes a simple mantelpiece but a very appropriate one for a log cabin.

FIREPLACES AND THE ART OF TENDING THE FIRE

There is an old fireplace in Small Acres, Binghamton, N. Y., of which I made sketches and took measurements which furnished me data by which I built the fireplaces in my own houses.

In Binghamton fireplaces the side walls are on an angle and converge toward the back of the fireplace, as in Fig. 274. The back also pitches forward, as in Fig. 282. The great advantage of this is the reflecting of more heat into the room.

Fig. 281 shows the fireplace before which I am now working. The fire was started in last November and is now (April 1) still burning, although it has not been rekindled since it was first lighted. This fireplace is well constructed, and on very cold days I have the fire burning out on the hearth fully a foot beyond the line of the mantel without any smoke coming into my studio.

Fig. 282 shows a diagram with the dimensions of my studio fireplace and represents the vertical section of it. I give these for the benefit of the people who want to know how to build a fireplace which will not smoke. But, of course, even the best of fireplaces will smoke if the fire is not properly arranged. With smoke the angle of reflection would be equal to the angle of incidence did not the constant tendency of smoke to ascend modify this rule.

Management of the Fire

But, before we enter into the question regarding the structure of the flue we will take up the management of the fire itself. In the first place, there is but one person who can manage a fire, and that is yourself. Servants never did and never will learn the art, and, as I am writing for men, and the ladies are not supposed to read this article, I will state that the fair sex show a like deficiency in this line. The first thing a woman wants to do with a fire is to make the logs roost on the andirons, the next thing is to remove every speck of ashes from the hearth, and then she wonders why the fire won't burn.

The ashes have not been removed from my studio fire since it was first lighted last fall. Ashes are absolutely essential to control a wood-fire and to keep the embers burning overnight. Fig. 288 shows the present state of the ashes in my studio fire. You will see by this diagram that the logs are not resting on the andirons. I only use the andirons as a safeguard to keep the logs from rolling out on the hearth. If the fire has been replenished late in the evening with a fresh log, before retiring I pull the front or the ornamental parts of the andirons to the hearth and then lay the shovel and poker across them horizontally. When the burning log is covered with ashes and the andirons arranged in this manner you can retire at night with a feeling of security and the knowledge that if your house catches afire it will not be caused by the embers in your fireplace. Then in the morning all you have to do is to shovel out the ashes from the rear of the fireplace, put in a new backlog, and bed it in with ashes, as shown in Fig. 286. Put your glowing embers next to the backlog and your fresh wood on top of that and sit down to your breakfast with the certainty that your fire will be blazing before you get up from the table.

Don't make the mistake of poking a wood-fire, with the idea, by that means, of making it burn more briskly, or boosting up the logs to get a draught under them.

Two logs placed edge to edge, like those in Fig. 288, with hot coals between them, will make their own draught, which comes in at each end of the log, and, what is essential in fire building, they keep the heat between themselves, constantly increasing it by reflecting it back from one to the other. If you happen to be in great haste to make the flames start, don't disturb the logs but use a pair of bellows.

Fig. 287 shows a set of the logs which will make the best-constructed fireplace smoke. The arrow-point shows the line of incidence or the natural direction which the smoke would take did not the heat carry it upward.

Fig. 285 shows the same logs arranged so that the angle of incidence strikes the back of the chimney and the smoke ascends in the full and orderly manner. But both Figs. 285 and 287 are clumsily arranged. The B logs in each case should be the backlog and the small logs A and C should be in front of B.

Proper and improper ways to build a fireplace and make a fire.

In all of the fireplaces which we have described you will note that the top front of the fireplace under the mantel extends down several inches below the angle of the chimney.

Fig. 283 shows a fireplace that is improperly built. This is from a fireplace in a palatial residence in New York City, enclosed in an antique Italian marble mantel, yellow with age, which cost a small fortune. The fireplace was designed and built by a firm of the best architects, composed of men famed throughout the whole of the United States and Europe, but the fireplace smoked because the angle of the chimney was below the opening of the fireplace and, consequently, sent the smoke out into the room. This had to be remedied by setting a piece of thick plate glass over the top of the fireplace, thus making the opening smaller and extending it below the angle of the chimney.

Fig. 284 shows the most primitive form of fireplace and chimney. One that a child may see will smoke unless the fire is kept in the extreme back of the hearth.

The advantages of ashes in your fireplace are manifold. They retain the heat, keep the hot coals glowing overnight, and when the fire is too hot may be used to cover the logs and subdue the heat. But, of course, if you want a clean hearthstone and the logs roosting upon the andirons, and are devoid of all the camp-fire sentiment, have some asbestos gas-logs. There will be no dust or dirt, no covering up at night with ashes, no bill for cord-wood, and it will look as stiff and prim as any New England old maid and be as devoid of sentiment and art as a department-store bargain picture frame.