Shelters, Shacks, and Shanties > Log Rolling and other Building Stunts

Of course my readers know all about geometry, but if by the rarest of chances one of them should not it will not prevent him from using that science to square the corners of his log cabin. Builders always have a ten-foot measuring rod—that is, a rod or straight stick ten feet long and marked with a line at each foot from end to end. Make your own ten-foot pole of as straight a piece of wood as you can find. With it measure six feet carefully on the log C, G (Fig. 180) and mark the point at O (Fig. 180); measure eight feet on the other log C, A (Fig. 180) and mark the point at N. If these measurements have been carefully made from C to O and from C to N and your corner is "square," then your ten-foot pole will reach between the two points O and N with the tips of the pole exactly touching O and N. If it does not exactly fit between N and O, either the corner is not square or you have not marked off the distances accurately on the logs. Test the measurements and if they are not found true then push your logs one way or the other until it is exactly ten feet from O to N. Then test the corner at H in the same manner. 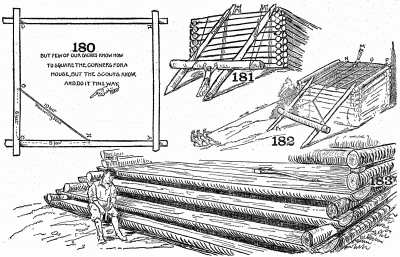 How to square the corners, roll the logs of cabin, and make log steps.

In the olden times log-rolling was always a great frolic and brought the people from far and near to lend a helping hand in building the new house. In handling logs, lumbermen have tools made for that purpose—cant-hooks, peevy irons, lannigans, and numerous other implements with names as peculiar as their looks—but the old backwoodsmen and pioneers who lived in log houses owned no tools but their tomahawks, their axes, and their rifles, and the logs of most of their houses were rolled in place by the men themselves pushing them up the skids laid against the cabin wall for that purpose; later, when the peddlers and traders brought ropes to the settlements, they used these to pull their logs in place. In building my log house in Pennsylvania we used two methods; one was hand power (Fig. 181). Taking two ropes we fastened the ends securely inside the cabin. We then passed the free ends of the ropes around the log, first under it and then over the top of it, then up to a group of men who, by pulling on the free ends, rolled the log (Fig. 181) up to the top of the cabin. But when Lafe Jeems and Nate Tanner and Jimmy Rosencranz were supplied with some oxen they fastened a chain to each end of the log (Fig. 182), then fastened a pulley-block to the other side of the cabin, that is, the side opposite the skids, and ran the line through the pulley-block to the oxen as it is run to the three men in Fig. 182. When the oxen were started the log slid up the skids to the loose rafters N, O, P and when once up there it was easily shoved and fitted into place.

Sometimes one wants front steps to one's log house and these may be made of flattened logs or puncheons, as shown by Fig. 183.