It must be confessed that some of the shacks described in the preceding pages are rather stout and massive to be classed as tomahawk shelters, but, as indicated by my reference to physiology, this is not the writer's fault. The trouble is owing to the fact that nature abhors the arbitrary division line which man loves to make for his own convenience. The tomahawk shacks gradually evolve into axe camps and houses and "there is no telling the beginning of one and the end of t'other." Hence, when I say that all the previous shacks, sheds, shelters, and shanties are fashioned with a hatchet, the statement must be accepted as true only so far as it is possible to build them without an axe; but in looking over the diagram it is evident at a glance that the logs are growing so thick that the necessity of the woodman's axe is more and more apparent; nevertheless, the accompanying caches have been classed with the tomahawk group and we will allow them to remain there.

Wherever man travels in the wilderness he finds it necessary to cache—that is, hide or secure some of his goods or provisions. The security of these caches (Figs. 98-111) is considered sacred in the wilds and they are not disturbed by savages or whites; but bears, foxes, husky dogs, porcupines, and wolverenes are devoid of any conscientious scruples and unless the cache is absolutely secure they will raid it. 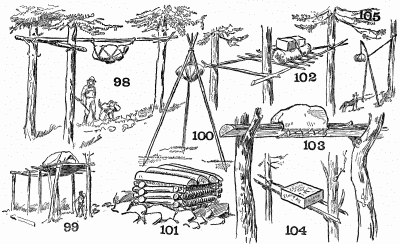 The first cache (Fig. 98) is called the "prospector's cache" and consists simply of a stick lashed to two trees and another long pole laid across this to which the goods are hung, swinging beneath like a hammock. This cache is hung high enough to be out of reach of a standing bear.

The tripod cache (Fig. 100) consists of three poles lashed at the top with the goods hung underneath.

Another form of the prospector's cache is shown by Fig. 102, where two poles are used in place of one and an open platform of sticks laid across the poles; the goods are placed upon the platform.

The tenderfoot's cache (Fig. 105) is one used only for temporary purposes as it is too easily knocked over and would be of no use where animals as large as bears might wreck it. It consists of two sticks lashed together at their small ends and with their butt ends buried in the earth; their tops are secured by a rope to a near-by tree while the duffel is suspended from the top of the longest pole.

The "Montainais" cache is an elevated platform upon which the goods are placed and covered with skins or tarpaulin or tent-cloth (Fig. 99).

The "Andrew Stone" cache is a miniature log cabin placed on the ground and the top covered with halved logs usually weighted down with stones (Fig. 101).

The "Belmore Browne" cache consists of a pole or a half of a log placed in the fork of the two trees on top of which the goods are held in place by a rope and the whole covered with a piece of canvas lashed together with eyelets, like a shoe (Fig. 103).

The "Herschel Parker" cache is used where the articles to be cached are in a box. For this cache two poles are lashed to two trees, one on each side of the trees (Fig. 104), and across the two poles the box is placed.

We now come to more pretentious caches, the first of which is the "Susitna," which is a little log cabin built on a table with four long legs. The poles or logs composing the legs of the table are cut in a peculiar fashion, as shown in the diagram to the left of Fig. 107; this is intended to prevent animals from climbing to the top; also, as a further protection, pieces of tin are sometimes tacked around the poles so as to give no foothold to the claws of the little animals.

Fig. 106 shows two other methods sometimes adopted to protect small caches and Fig. 108 is still another method of using logs which have the roots still attached to them for supports. Such logs can be used where the ground is too stony to dig holes for posts.

Fig. 109 shows another form of the Susitna cache wherein the goods are packed in a box-like structure and covered with tent-cloth tightly lashed down.

The "Dillon Wallace" cache (Fig. 110) is simply a tent erected over the goods and perched on an elevated platform.

The "Fred Vreeland" cache is a good, solid, practical storehouse. It is built of small logs on a platform, as shown by Fig. 111, and the bottom of the building is smaller than it is at the eaves. It is covered with a high thatched roof and is ornamental as well as useful. 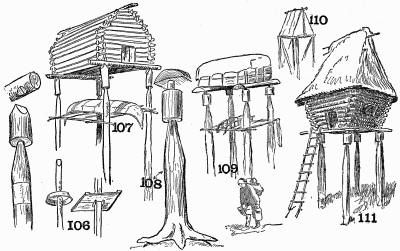 These caches might really belong to a book of woodcraft, but it is another case of the "ileum and jejunum," and we will rule that they technically come under the head of shacks, sheds, shelters, and shanties and so are included in this volume; but there is another and a very good reason for publishing them in this book, and that is because some of them, like Figs. 107 and 111, suggest novel forms of ornamental houses on country estates, houses which may be used for corn-cribs or other storage or, like the tree-top houses, used for pleasure and amusement.