Ken is a name now almost obsolete but the bog ken is a house built on stilts where the ground is marshy, damp, and unfit to sleep upon. As you will see by the diagram (Fig. 66), the house is built upon a platform similar to the one last described; in this instance, however, the shelter itself is formed by a series of arches similar to the Iroquois (Fig. 41). The uprights on the two sides have their ends bent over and lashed together, forming arches for the roof. Over the arches are lashed horizontal poles the same as those described in the construction of the Iroquois lodge. Fig. 67 shows one way to prevent "varmints" of any kind from scaling the supporting poles and creeping into your camp.

The protection consists of a tin pan with a hole in the bottom slid over the supporting poles. Fig. 66 shows how to lash the thatching on to the poles and Fig. 68 shows how to spring the sticks in place for a railing around your front porch or balcony.

The floor to this bog ken is a little more elaborate than that of the last described camp because the poles have all been halved before laying them for the floor. These are supposed to be afterwards covered with browse, hay, or rushes and the roof shingled with bark or thatched.

Soak your straw or hay well in water and smooth it out flat and regular. The steeper the roofs the longer the thatch will last. In this bog ken our roof happens to be a rounded one, an arched roof; but it is sheltering a temporary house and the thatch will last as long as the shack. While the real pioneer uses whatever material he finds at hand, it does no harm for him to know that to make a really good thatch one should use only straw which is fully ripe and has been thrashed clean with an old-fashioned flail. The straw must be clear of all seed or grain and kept straight, not mussed up, crumpled, and broken. If any grain is left in the straw it will attract field-mice, birds, domestic mice and rats, domestic turkeys and chickens, and these creatures in burrowing and scratching for food will play havoc with the roof. 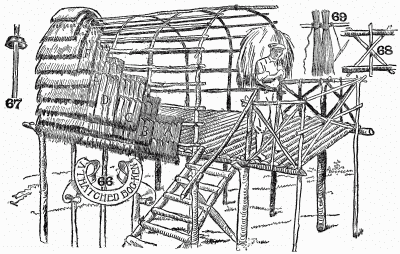 It is not necessary to have straight and even rafters, because the humps, bumps, and hollows caused by crooked sticks are concealed by the mattress of straw. Take a bundle of thatch in your hands, squeeze it together, and place it so that the butt ends project about three inches beyond the floor (A, Fig. 66); tie the thatch closely to the lower rafter and the one next above it, using for the purpose twine, marlin, raffia, or well-twisted white hickory bark. This first row should be thus tied near both ends to prevent the wind from getting under it and lifting it up. Next put on another row of wisps of thatch over the first and the butt ends come even with the first, but tie this one to the third row of rafters not shown in diagram. The butts of the third row of thatch (B, Fig. 66) should be about nine inches up on the front rows; put this on as before and proceed the same way with C, D, E, and F, Fig. 66, until the roof is completed. The thatch should be ten or twelve inches thick for a permanent hut but need not be so for a temporary shed.

As there is no comb to this roof the top must be protected where the thatches from each side join, and to do this fasten a thatch over the top and bind it on both sides but not in the middle, so that it covers the meeting of the thatches on both sides of the shack; this top piece should be stitched or bound on with wire if you have it, or fastened with willow withe or even wisps of straw if you are an expert. A house, twenty by thirty feet, made of material found on the place and thatched with straw costs the builder only fifty cents for nails and four days' work for two persons. A good thatched roof will last as long as a modern shingle roof, for in olden days when shingles were good and split out of blocks, not sawed, and were well seasoned before using, they were not expected to last much over fifteen years; a well-made thatched roof will last fifteen or twenty years. 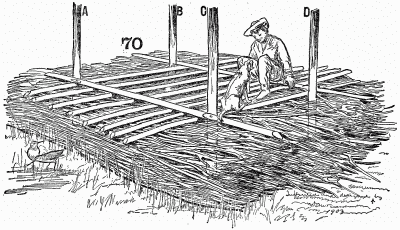 But a real bog ken is one that is built over boggy or marshy places too soft to support an ordinary structure. To overcome this difficulty required considerable study and experiment, but at length the author hit upon a simple plan which has proved effective. If you wish to build a duck hunter's camp on the soft meadows, or for any other reason you desire a camp on treacherous, boggy ground, you may build one by first making a thick mattress of twigs and sticks as shown by Fig. 70. This mattress acts on the principle of a snow-shoe and prevents your house from sinking by distributing the weight equally over a wide surface. The mattress should be carefully made of sticks having their branches trimmed off sufficiently to allow them to lie in regular courses as in the diagram. The first course should be laid one way and the next course at right angles to the first, and so on, until the mattress is sufficiently thick for the purpose.

Standing on the mattress, it will be an easy matter with your hands to force the sharpened ends of your upright posts A, B, C, and D down into the yielding mud, but be careful not to push them too far because in some of these marshes the mud is practically bottomless. It is only necessary for the supports to sink in the mud far enough to make them stand upright. 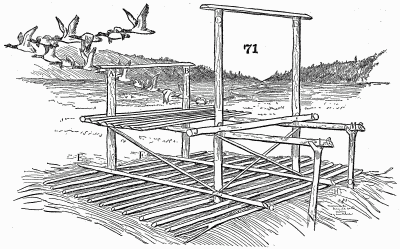 The next step is to lay, at right angles to the top layer of brush, a series of rods or poles between your uprights as shown in Fig. 70; then take two more poles, place them at right angles to the last ones, and press them down until they fit snugly on top of the other poles, and there nail them fast to the uprights as shown in Fig. 70, after which to further bind them you may nail a diagonal from A to D and B to C, but this may not be necessary.

When you have proceeded thus far you may erect a framework like that shown in Fig. 71, and build a platform by flooring the crosspieces or horizontal bars with halves of small logs, Fig. 71.

It is now a simple matter to erect a shack which may be roofed with bark as in Fig. 72 or thatched as in Fig. 74. Fig. 72 shows the unfinished shack in order that its construction may be easily seen; this one is being roofed with birch bark. A fireplace may be made by enclosing a bed of mud (Fig. 73) between or inside of the square formed by four logs. On this clay or mud you can build your camp-fire or cooking fire or mosquito smudge with little or no danger of setting fire to your house.

The mosquito smudge will not be found necessary if there is any breeze blowing at all, because these insects cling to the salt hay or bog-grass and do not rise above it except in close, muggy weather where no breeze disturbs them. I have slept a few feet over bog meadows without being disturbed by mosquitoes when every blade of grass on the meadows was black with these insects, but there was a breeze blowing which kept the mosquitoes at home. 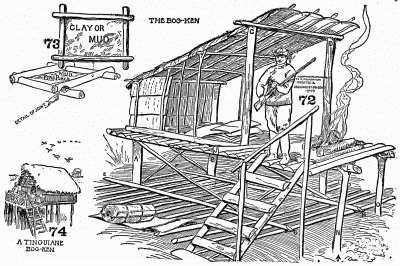 Adaptation of a bark shack to the bog ken foundation.
Back to Shelters, Shacks, and Shanties