Shelters, Shacks, and Shanties > How to Make a Sod House


How to Make a Sod House

The difference between this sod house and the ones used in the arid regions consists in the fact that the sod will be growing on the sod house, which is intended for and is an ornamental building for the lawn. Possibly one might say that the sod house is an effete product of civilization where utility is sacrificed to display; but it is pretty, and beauty is always worth while; besides which the same plans may be used in building

and practically are used in some of the desert ranches along the Colorado River. The principal difference in construction between the one shown in Figs. 50, 53, and 57 and the one in Fig. 55 is that in the sod house the sod is held in place by chicken-coop wire, while in the ranch-house (Fig. 55) the dirt or adobe is held in place by a number of sticks. 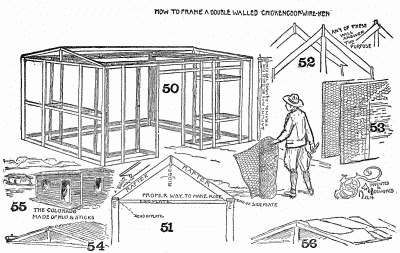 A house of green growing sod and the Colorado River adobe.

Fig. 50 shows how the double walls are made with a space of at least a foot between them; these walls are covered with wire netting or chicken-coop wire, as shown in Fig. 53, and the space between the walls filled in with mud or dirt of any kind. The framework may be made of milled lumber, as in Fig. 50, or it may be made of saplings cut on the river bank and squared at their ends, as shown by detailed drawings between Figs. 50 and 52. The roof may be made flat, like Figs. 54 and 56, and covered with poles, as in Fig. 54, in which case the sod will have to be held in place by pegging other poles along the eaves as shown in the left-hand corner of Fig. 54. This will keep the sod from sliding off the roof. Or you may build a roof after the manner illustrated by Fig. 49 and Fig. 51, that is, if you want to make a neat, workmanlike house; but any of the ways shown by Fig. 52 will answer for the framework of the roof. The steep roof, however, must necessarily be either shingled or thatched or the sod held in place by a covering of wire netting. If you are building this for your lawn, set green, growing sod up edgewise against the wire netting, after the latter has been tacked to your frame, so arranging the sod that the green grass will face the outside. If you wish to plaster the inside of your house with cement or concrete, fill in behind with mud, plaster the mud against the sod and put gravel and stones against the mud so that it will be next to the wire netting on the inside of the house over which you plaster the concrete. If you make the roof shown in Fig. 54, cover it first with hay and then dirt and sod and hold the sod down with wire netting neatly tacked over it, or cover it with gravel held in place by wire netting and spread concrete over the top as one does on a cellar floor. If the walls are kept sprinkled by the help of the garden hose, the grass will keep as green as that on your lawn, and if you have a dirt roof you may allow purple asters and goldenrod to grow upon it (Fig. 62) or plant it with garden flowers.

If you are going to make a thatched roof, soak your thatch in water and straighten the bent straws; build the roof steep like the one shown in Fig. 57 and make a wooden needle a foot long and pointed at both ends as shown in Fig. 59; tie your thatching twine to the middle of the needle, then take your rye or wheat straw, hay, or bulrushes, gather it into bundles four inches thick and one foot wide, like those shown in Fig. 60, and lay them along next to the eaves of your house as in Fig. 58. Sew them in place by running the needle up through the wire netting to the man on the outside who in turn pushes it back to the man on the inside. Make a knot at each wisp of the thatch until one layer is finished, let the lower ends overhang the eaves, then proceed as illustrated by Fig. 66 and described under the heading of the bog ken.

If in place of a simple ornament you want to make a real house of it and a pretty one at that, fill up the space between the walls with mud and plaster it on the outside with cement or concrete and you will have a cheap concrete house. The wire netting will hold the plaster or the concrete and consequently it is not necessary to make the covering of cement as thick as in ordinary buildings, for after the mud is dried upon the inside it will, with its crust of cement or plaster, be practically as good as a solid concrete wall. 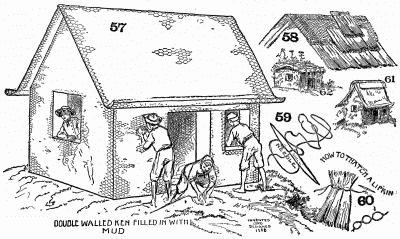 Ornamental sod house for the lawn.
Back to Shelters, Shacks, and Shanties