Secret locks are more useful than strong ones for a country house which is left alone during the winter months, for it is not so much cupidity which causes such houses to be broken into as it is the curiosity of the native boys. But while these lads often do not hesitate to force or pick a lock they will seldom go as far as to smash a door to effect an entrance; hence, if your lock is concealed your house is safe from all but professional thieves, and such gentry seldom waste their time to break open a shack which contains nothing of value to them. The latches shown by Figs. 193, 200, and 201 may be made very heavy and strong, and if the trigger in Fig. 200, the latch-string hole in Fig. 193, and the peg hole in Fig. 201 are adroitly concealed they make the safest and most secure locks for summer camps, shacks, and houses.

If a large bar (Fig. 201½ B) be made of one-by-four-inch plank, bolted in the middle of the plank with an iron bolt through the centre of the door and fastened on the inside by a nut screwed on to the bolt it will allow the bar to revolve freely on the inside of the door and bar the door when resting in the A and C catches. But if a string is attached to one end it may be unfastened by pulling the string up through the gimlet hole in the door.

To conceal this lock, draw the string through the gimlet hole and fasten a nail on the string. When it is undrawn the door bar is horizontal and the door consequently barred. Then push the nail in the gimlet hole so that only the head appears on the outside and no one not in the secret will ever suppose that the innocent-appearing nail is the key to unfasten the door. When you wish to open the door from the outside, pluck out the nail, pull the string, and walk in.

There are a thousand other simple contrivances which will suggest themselves to the camper, and he can find entertainment for rainy days in planning and enlarging on the ideas here given. In the real wilderness, however, every camp is open to all comers—that is, the latch-string hangs outside the door, but the real woodsmen respect the hospitality of the absent owner and replace whatever food they may use with fresh material from their own packs, wash all dishes they may use, and sweep up and leave the shack in "apple-pie" order after their uninvited visit, for this is the law of the wilderness which even horse thieves and bandits respect.

The Tippecanoe latch is worked with a wooden spring and when properly made, of well-seasoned wood, will probably outlast a metal one, for wood will not rust and cannot rot unless subjected to moisture.

The position of the spring in Fig. 201 shows the latch with the bolt sprung back. The fact that the bolt-hole in the catch is empty also tells the same story. The drawing of the outside of the door (Fig. 203) shows by the position of the peg that the door is fastened. To open the door, push back the bolt by sliding the peg to the opposite end of the slot. From a view of the edge of the door (Fig. 202) one may see how the peg protrudes on the outside of the door. 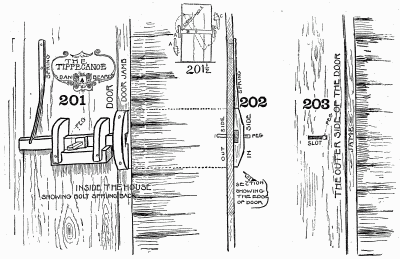 The Tippecanoe. A jack door-latch.

Although the Tippecanoe latch is made of quite a number of parts, it is really a very simple device, but in order to display the simplicity of its construction to the ambitious jack-knife latch maker I have drawn all the parts but the spring stick natural size (Figs. 204 to 207), but since the original diagram is drawn too large for this page and was reduced by the engraver there is a scale of inches at the bottom to give the reader the proportions.

There are no fixed dimensions for this or any other lock, latch, or catch, but the proportions here given are probably the ones that will fit your door. The foundation block is shown by Fig. 204. Upon this the latch rests and is securely nailed or screwed to the door. Figs. 205 and 206 are two wooden clamps which are fastened to the door and also to the foundation block (Fig. 204). These clamps must be notched as in the diagrams to allow for the movement of the bolt, but since the bolt (Fig. 207) is larger and thicker at the butt the notch in Fig. 205 is made just a trifle larger than the butt end of the bolt and in Fig. 206 the notch is made a trifle smaller than the opposite end of the bolt. The object of the offset on the bolt (Fig. 207) forward of the peg is to make a shoulder to stop it from shooting too far when the spring is loosened. 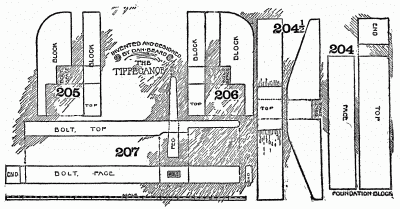 Figs. 201 and 204½ show the catch which is to be securely fastened to the door-jamb. The spring, of course, must be made of well-seasoned, elastic wood. Hickory is the best. This stick may be quite long, say half again as long in proportion as the one shown in Fig. 201. It must be flattened at the upper end and secured by two nails and it must be flattened at right angles to the upper part and somewhat pointed at the lower end so as to fit in a notch in the bolt (Fig. 201). A well-made lock of this sort is a source of constant joy and pride to the maker and he will never tire of springing it back and forth and extolling its virtues to his guests.