Shelters, Shacks, and Shanties > How to Build the Red Jacket, The New Brunswick, and the Christopher Gist


How to Build the Red Jacket, The New Brunswick, and the Christopher Gist

The "Red Jacket" is another camp; but this, you see, has straight walls, marking it as a white man's camp in form not apparently borrowed from the red men. It is, however, a good, comfortable, rough camp and Figs. 190 and 191 show how it was evolved or grew. To build the Red Jacket one will first have to know how to build the more simple forms which we call the New Brunswick, then the next step will be the Christopher Gist, and last the Red Jacket. We will now begin with the New Brunswick.

By referring to Fig. 190 you will see that it is practically a deep, Adirondack, open-face camp with a wind-shield built in front of it. To build this camp, make the plan about six feet by twelve on the ground; of course the back logs must be something over six feet long to allow for six feet in the clear. Notch about four or five back logs with the plain, rounded notch already described and illustrated by Fig. 165. Then lay the side sill logs and erect two upright forked sticks for the front of your cabin to hold the cross stick which supports the roof rafter. Now build up your cabin as you would a log house, notching only the small ends of the side logs and saving the larger ends for the front; between each of these chink with other logs shaped to fit the spaces or with pieces of other logs so as to make the front higher than the rear. When the logs meet the rafter pole all the cracks are chinked up with small pieces of wood and the crevices calked with moss. Then the roof of bark is put on, shingled as described for the Pontiac, and illustrated by Figs. 36 and 190 A. The bark is kept in place by laying sticks or poles over it to weight it down, as may be seen by the plan of the roof (Fig. 190 A), which is supposed to be the way the unfinished roof would look to you if you were looking down upon it from the branch of a tree or an aeroplane. After you have your open-faced camp finished take some green logs from the fir-trees if they are handy and split them in half by one of the methods shown by Fig. 119. Then leaving enough room for a passageway, erect your wind-shield of green logs, resting them against a pole laid between two forked sticks. Be sure you have the green, split side of the log facing the camp and the bark side facing outdoors, because the green wood will not burn readily; and as the camp-fire is built close to the wind-shield, if the shield is made of very inflammable material it will soon burn down. Some woods, you know, burn well when green and some woods must be made dry before we can use them for fuel; but the wood we want for the fire-shield is the sort that will not burn readily; the good-burning woods we save to use in our fire.

The next camp is the Christopher Gist, named after George Washington's camping friend. This camp, as you may see by Fig. 191, is built like a New Brunswick except that the side sill logs are much longer as is also the log which extends over the doorway. Then, in place of having a wind-shield built by itself, the wind-shield in Fig. 191 is the other end of the cabin built just the same as the rear end, but it should be built of peeled logs as they are less liable to catch afire than the ones with the bark upon them. If you feel real lazy it will only be necessary to peel the bark off from the inside half of the log. Above the door at the end of the roof of the Adirondack camp part of the space is filled by logs running across, with the lower one resting upon the top of the door-jamb; this closes the shed above the wind-shield and leaves a little open yard in front wherein to build your camp-fire. 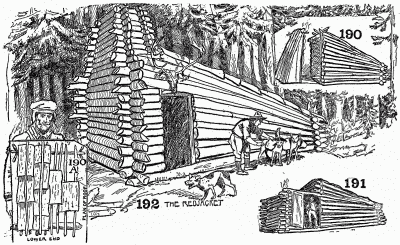 The stages in the evolution of a log cabin.

The Red Jacket continues the suggestion offered by the Christopher Gist and extends the side walls all the way across to the wind-shield, and the latter now becomes the true end of the log shack. The side walls and end wall are built up from the top of the shack to form a big, wide log chimney under which the open camp-fire is built on the ground. The Red Jacket is roofed with bark in the same manner as the New Brunswick and Christopher Gist and occupies the important position of the missing link between the true log cabin or log house and the rude log camp of the hunter. If you will look at Fig. 184, the open-faced log camp; then Fig. 190, the camp with the wind-shield in front of it; then Fig. 191 with the wind-shield enclosed but still open at the top; then 192 where the wind-shield has turned into a fireplace with a chimney; then Figs. 271 and 273, showing the ends of the real log cabin, you will have all the steps in the growth or evolution which has produced the American log house.