No observing person has travelled far upon the American railroads without noticing, alongside the tracks, the queer little houses built of railroad ties by Italian laborers. These shacks are known by the name of dagoes (Fig. 136) and are made in different forms, according to the ingenuity of the builder. The simplest form is the tent-shaped shown in Fig. 136, with the ends of the ties rested together in the form of a tent and with no other support but their own weight (see the diagram to the right, Fig. 136). I would not advise boys to build this style, because it might make a trap to fall in upon them with serious results, but if they use a ridge-pole like the one shown in Fig. 139 and against it rest the ties they will do away with the danger of being caught in a deadfall trap. Of course, it is understood that the ridge-pole itself must first be secure.

Railroad ties being flat (Fig. 137), they may be built up into solid walls (Fig. 137) and make neat sides for a little house; or they may be set up on edge (Fig. 138) and secured in place by stakes driven upon each side of them; or they may be made into the form of an open Adirondack camp (Figs. 139 and 140) by resting the ties on a ridge-pole supported by a pair of "shears" at each end; the shears, as you will observe, consist of two sticks bound together near the top and then spread apart to receive the ridge-pole in the crotch. 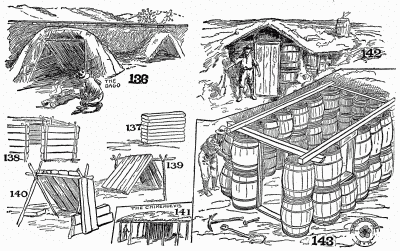 All of these structures are usually covered with dirt and sod, and they make very comfortable little camps.

In the Southwest a simple shelter, the "Chimehuevis," is made by enclosing a room in upright poles (Fig. 141) and then surrounding it with a circle of poles supporting a log or pole roof covered with sod, making a good camp for hot weather.

Fig. 142 shows a barrel dugout. It is made by digging a place for it in the bank and, after the floor is levelled off, setting rows of barrels around the foundation, filling these barrels with sand, gravel, or dirt, then placing another row on top of the first, leaving spaces for a window and a door, after which the walls are roofed with logs and covered with sod, in the same manner as the ones previously described. The dirt is next filled around the sides, except at the window opening, as shown by Fig. 142. A barrel also does duty as a chimney.

Shacks like this are used by homesteaders, miners, trappers, and hunters; in fact, these people use any sort of material they have at hand. When a mining-camp is near by the freight wagons are constantly bringing in supplies, and these supplies are done up in packages of some kind. Boards are frequently worth more a yard than silk, or were in the olden days, and so the home builders used other material. They built themselves houses of discarded beer bottles, of kerosene cans, of packing-boxes, of any and every thing. Usually these houses were dugouts, as is the barrel one shown in Fig. 142. In the big-tree country they not infrequently made a house of a hollow stump of a large redwood, and one stone-mason hollowed out a huge bowlder for his dwelling; but such shacks belong among the freak shelters. The barrel one, however, being the more practical and one that can be used almost anywhere where timber is scarce but where goods are transported in barrels, deserves a place here among our shacks, shelters, and shanties.