Shelters, Shacks, and Shanties > A Pole House. How to Use a Cross-Cut Saw and Froe


A Pole House. How to Use a Cross-Cut Saw and Froe

Fig. 171 shows a pole house—that is, a house, the walls of which are made by setting straight poles up on end with sides against each other and nailing a beam across the top (Fig. 172) and toe-nailing them (Fig. 173); that is, driving the nails slantingly down through the poles to the sill beneath. Fig. 172 shows how to nail them to the top beam or side-plate. To build a pole house, erect the four corner-posts and any intermediate posts which may be necessary, nailing the plates on top of the posts to hold the frame together (Fig. 172), afterward fitting the other posts in place, as shown in the sketch.

We have not yet arrived at the part of the book where we can build as extensive houses as the one shown here. The drawing is only inserted at this place because it naturally comes with the use of the cross-cut saw. You can, however, without much trouble, build a small pole house without the veranda, and after you have learned how to build the big log houses you can turn back to this page and try a pole house like Fig. 171. 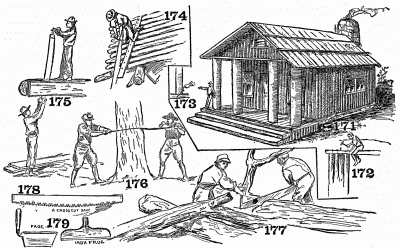 Sawing on an Angle

Fig. 174 shows how to saw off poles on the bias, as a woman would say, or on an angle, as a man would say. Suppose, for instance, you want to cut the poles to fit the dormer over the veranda shown in Fig. 171. Measure off the height of the middle pole, then the distance along the base from the middle pole to the corner at the eaves. Next fit the poles you are going to use closely together to cover that distance; hold them in place by nailing a plank temporarily across the bottom ends; then place another plank at the point marked for the height of the middle pole, run it down to the bottom plank, and nail it temporarily along this line. Now take hold of one end of the saw, as the fellow does in Fig. 174, and let another boy take the other end of the saw; then by working it back and forth along the line you may saw off the protruding ends of the poles. Proceed in the same manner along the base-board. You will then have half the dormer poles all nicely tacked together and cut in the right shape so that they may be evenly fitted in place, and after they are secured there the marking planks may be knocked off. Fig. 175 shows two boys at work "pit-sawing." They are sawing planks from a log, which is rather hard work but not unpleasant. I know, for I have tried it when I was up among the moonshiners in the mountains of Kentucky. Fig. 176 is from a sketch I made up in Michigan, where two men were sawing down a tree as they frequently do nowadays in place of chopping it down with an axe; this tree, however, was first notched with an axe so that it would fall in the right direction. Fig. 178 shows the peculiar teeth of one of these two-handled saws. It is not necessary for you to be expert on the sort of teeth a saw should have; any saw that cuts well for your purpose is the sort of saw you need.

Fig. 179 shows two forms of the froe, an implement used for splitting shakes and shingles and clapboards like those on the roof of Fig. 171. The froe is held by the handle with the left hand and hammered on the top with a mallet held in the right hand. Fig. 177 shows two boys sawing a log up into sections, but for our work in cabin building the woodsman's axe is the real tool we need. The saw is all right and may be used if you have it, but it is a little too civilized for real woodcraft work. You cannot throw one of these saws over your shoulder as you would an axe and go marching into the woods with any comfort. The saw is also a more dangerous implement around camp than even a sharp axe.