Shelters, Shacks, and Shanties > How to Make a Pole House and American Totem Log House


How to Make a Pole House and American Totem Log House

A pole house is a log house with the logs set upright. We call it a pole house because, usually, the logs are smaller than those used for a log house. The pole house (Fig. 250) is built in the manner shown by Figs. 171, 172, and 173, but in the present instance the ridge-pole is a log which is allowed to extend some distance beyond the house both in front and rear, and the front end of the ridge-pole is carved in the shape of a grotesque or comical animal's head like those we see on totem-poles. The roof is made of shakes (see Figs. 126 to 130) and the shakes are held in place by poles pegged onto the roof in much the same manner as we have described and called les péches for the Kanuck. This pole cabin may have an old-fashioned Dutch door which will add to its quaintness and may have but one room which will answer the many purposes of a living-room, sleeping-room, and dining-room. A lean-to at the back can be used for a kitchen.

But if you really want something unique, build a log house on the general plan shown by Figs. 251 and 252; then carve the ends of all the extending logs to represent the heads of reptiles, beasts, or birds; also carve the posts which support the end logs on the front gallery, porch, or veranda in the form of totem-poles. You may add further to the quaint effect by placing small totem-posts where your steps begin on the walk (Fig. 253) and adding a tall totem-pole (Fig. 255) for your family totem or the totem of your clan. Fig. 252 shows how to arrange and cut your logs for the pens. The dining-room is supposed to be behind the half partition next to the kitchen; the other half of this room being open, with the front room, it makes a large living-room. The stairs lead up to the sleeping-rooms overhead; the latter are made by dividing the space with partitions to suit your convenience.

Take your jack-knife and a number of little sticks to represent the logs of your cabin; call an inch a foot or a half inch a foot as will suit your convenience and measure all the sticks on this scale, using inches or parts of inches for feet. Then sit down on the ground or on the floor and experiment in building a toy house or miniature model until you make one which is satisfactory. Next glue the little logs of the pen together; but make the roof so that it may be taken off and put on like the lid to a box; keep your model to use in place of an architect's drawing; the backwoods workmen will understand it better than they will a set of plans and sections on paper. Fig. 251 is a very simple plan and only put here as a suggestion. You can put the kitchen at the back of the house instead of on one side of it or make any changes which suit your fancy; the pen of the house may be ten by twelve or twenty by thirty feet, a camp or a dwelling; the main point is to finish your house up with totems as shown by Fig. 253, and then tell the other fellows where you got the idea. 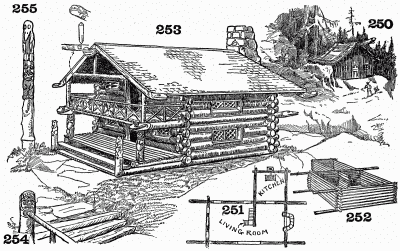 A totem motif. An artistic and novel treatment for a log house.

For any structure which is intended to be permanent never use the logs with bark on them; use peeled logs. When your house is finished it may look very fresh and new without bark, but one season of exposure to the weather will tone it down so that it will be sufficiently rustic to please your fancy, but if you leave the bark on the logs, a few seasons will rot your house down, making it too rustic to suit any one's fancy.

Lay up the pen of this house as already described and illustrated by Figs. 229, 233, etc., and when the sides and front walls have reached the desired height, frame your roof after the manner shown by Fig. 49 or any of the other methods described which may suit your fancy or convenience, but in this case we use the Susitna form for the end plates, which are made by first severing the root of a tree and leaving an elbow or bend at the end of the trunk (Fig. 264). This is flattened by scoring and hewing as is described and illustrated under the heading of the Susitna house. The elbows at the terminals of the end plate are carved to represent grotesque heads (Fig. 253). The house when built is something like the Wyoming olebo (Fig. 236), but with the difference which will appear after careful inspection of the diagram. The Wyoming olebo is a one-story house; this is a two-story house. The Wyoming olebo has a roof built upon a modified plan of a Kanuck; this roof is built on the American log-cabin plan, with the logs continued up to the top of the gable, as are those in the Olympic (Fig. 240). But the present house is supposed to be very carefully built; to be sure, it is made of rude material but handled in a very neat and workmanlike manner. Great care must be used in notching and joining the logs, and only the straightest logs which can be had should be used for the walls of the house. The piazza may need some additional supports if there is a wide front to the house, but with a narrow front half, log puncheons will be sufficiently stiff to support themselves.

The most difficult part about these descriptions, for the writer, is where he attempts to tell you how to make your totems; but remember that a totem, in order to have a real totem look, must be very crude and amateurish, a quality that the reader should be able to give it without much instruction. The next important thing is that when you make one side of a head, be it a snake's, a man's, a beast's, or a bird's, make the other side like it. Do not make the head lopsided; make both sides of the same proportions. Flatten the sides of the end of the log enough to give you a smooth surface, then sketch the profile on each side of the log with charcoal or chalk, carve out the head with a chisel, drawing-knife, and jack-knife, and gouge until you have fashioned it into the shape desired. In order to do this the end of the log should be free from the ground and a convenient distance above it. The carving is best done after the house is practically finished; but the two end plates had better be carved before they are hoisted into place.

When you carve out the totem-poles (Fig. 256 or 262), the log had better be put on an elongated sawbuck arrangement which will hold it free from the ground and allow one to turn it over as the work may require. Fig. 259 represents a peeled log. On this log one may sketch, with chalk, the various figures here represented, then begin by notching the log (Fig. 258) according to the notches which are necessary to carve out the totem. Figs. 260, 261, and 262 show different views of the same totem figures. Fig. 257 shows how to make a variation of the totem-pole. Paint your totem heads and figures red, blue, and yellow, and to suit your fancy; the more startling they are the better will they imitate the Indian totems. The weather will eventually tone them down to the harmonious colors of a Turkish rug.

In "The Boy Pioneers" I have told how to make various other forms of totems, all of which have since been built by boys and men in different parts of the country. Mr. Stewart Edward White, a member of the Camp-Fire Club of America, woodsman, plainsman, mountaineer, and African hunter and explorer, built himself a totem in the form of a huge bird twelve feet high from the plans published in "The Boy Pioneers," and I anticipate no great difficulty will be encountered by those who try to totemize a log cabin after the manner shown by Fig. 258. It will not, however, be a small boy's work, but the small boys who started at the beginning of this book are older and more experienced now, and, even if they cannot handle the big logs themselves, they are perfectly competent to teach their daddies and uncles and their big brothers how to do it, so they may act as boss builders and architects and let the older men do the heavy work. But however you proceed to build this house, when it is finished you will have a typically native building, and at the same time different from all others, as quaint as any bungling bungalow, and in better taste, because it will fit in the landscape and become part of it and look as if it belonged there, in place of appearing as if it had been blown by a tornado from some box factory and deposited in an unsuitable landscape. 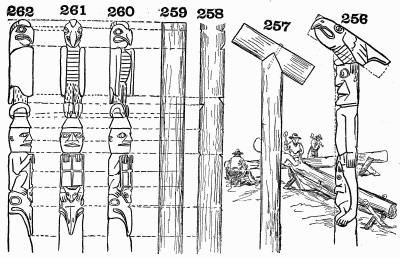 Totem-poles and how to make them.

You must understand by this that unsuitable refers to the fact that a bungalow does not belong in the American landscape, although many of the cottages and shacks, miscalled bungalows, may be thoroughly American and appropriate to the American surroundings despite the exotic name by which some people humble them.