When the French Communists were raising Cain in Europe they doubtless thought their idea was practically new, but thousands of years before they bore the red banner through the streets of Paris the American Indians were living quiet and peaceful communal lives on this continent; when I use the words quiet and peaceful, I, of course, mean as regards their own particular commune and not taking into account their attitude toward their neighbors. The Pueblo Indians built themselves adobe communal houses, the Nez Percés built themselves houses of sticks and dry grass one hundred and fifty feet long sometimes, containing forty-eight families, while the Nechecolles had houses two hundred and twenty-six feet in length! But this is not a book of history; all we want to know is how to build shacks for our own use; so we will borrow one from the communal home of the Iroquois. It is not necessary for us to make this one hundred feet long, as the Iroquois Indians did. We can make a diminutive one as a playhouse for our children, a moderate-sized one as a camp for our Boy Scouts, or a good-sized one for a party of full-grown campers.

But first we must gather a number of long, flexible saplings and plant them in two rows with their butt ends in the ground, as shown in Fig. 40, after which we may bend their upper ends so that they will overlap each other and form equal-sized arches, when they are lashed together, with twine if we have it, or with wire if it is handy; but if we are real woodsmen, we will bind them with rope made of fibres of bark or the flexible roots which we find in the forests. Then we bind horizontal poles or rods to the arches, placing the poles about a foot or two apart according to the material with which we are to shingle it. We make a simple doorway with upright posts at one end and bind the horizontal posts on as we did at the sides. Next we shingle it with bark or with strips of tar paper and hold the shingles in place by binding poles upon the outside, as shown in Fig. 41. A hole or holes are left in the roof over the fireplaces for openings for the smoke to escape. In lieu of a chimney a wind-shield of bark is fastened at its lower edge by pieces of twine to the roof so as to shield the opening; this wind-shield should be movable so that it may be shifted according to the wind. The Iroquois is an easily constructed shelter, useful to man, and one which will delight the heart of the Boy Scouts or any other set of boys.

The Pawnee hogan is usually covered with sod or dirt, but it may be covered with bark, with canvas, or thatched with straw or with browse, as the camper may choose. Fig. 42 shows the framework in the skeleton form. The rafter poles are placed wigwam fashion and should be very close together in the finished structure; so also should be the short sticks forming the side walls and the walls to the hallway or entrance. To build this hogan, first erect a circle of short forked sticks, setting their ends firmly in the ground. Inside of this erect four longer forked sticks, then place across these four horizontal side-plates, or maybe they might be more properly called "purlins," in which case the sticks laid on the forks of the circle of small uprights will properly correspond to the side-plates of a white man's dwelling. After the circle and square (Fig. 42) have been erected, make your doorway with two short-forked sticks and your hallway by sticks running from the door to side-plates. In thatching your roof or in covering it with any sort of material, leave an opening at the top (Fig. 43) to act as a chimney for your centre camp-fire. If the roof is to be covered with sod or adobe, cover it first with browse, hay, straw, or rushes, making a thick mattress over the entire structure. On top of this plaster your mud or sod (Fig. 43). If you intend to use this hogan as a more or less permanent camp you can put windows in the sides to admit light and air and use a hollow log or a barrel for a chimney as shown in Fig. 44. 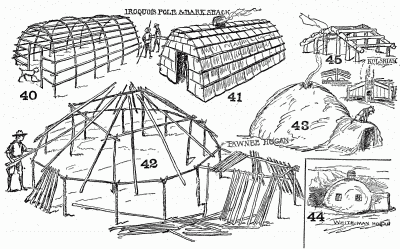 The Iroquois, the Pawnee hogan, the white man's hogan, and the kolshian.

The camps thus far described are supposed to be "tomahawk camps," that is, camps which may be built without the use of a lumberman's axe. The kolshian (Fig. 45) of Alaska, when built by the natives, is a large communal council-house, but I have placed it here among the "tomahawk camps" on the supposition that some one might want to build one in miniature as a novelty on their place or as a council-room for their young scouts. The Alaskans hew all the timber out by hand, but, of course, the reader may use sawed or milled lumber. The proper entrance to a kolshian or rancheree, as Elliot calls it, is through a doorway made in the huge totem-pole at the front of the building. The roof is covered with splits or shakes held in place by poles laid across them, the sides are made of hewn planks set upright, and the front has two heavy planks at the eaves which run down through holes in two upright planks at the corners (Fig. 45). These with the sill plank bind the upright wall planks in place.

The kolshian is undoubtedly a very ancient form of building and may be related to the houses built by the ancient cavemen of Europe. The first human house-builders are said to belong to the Cro-Magnon race who lived in caves in the winter-time, and on the walls of one of the caverns (Dordogne cavern) some Cro-Magnon budding architect made a rough sketch of one of their houses (middle sketch, Fig. 45). When you compare the house with the kolshian the resemblance is very striking, and more so when we remember that the kolshian floor is underground, indicating that it is related to or suggested by a natural cavern.