Shelters, Shacks, and Shanties > How to Build a Kanuck Log Cabin

If the writer forgets himself once in a while and uses words not familiar to his boy readers, he hopes they will forgive him and put all such slips down as the result of leaving boys' company once in a while and associating with men. The reader knows that men dearly love big, ungainly words and that just as soon as boys do something worth while the men get busy hunting up some top-heavy name for it.

When one is talking of foreign things, however, it is well to give the foreign names for those things, and, since the next house to be described is not a real American one but a native of Canada, the Canadian names are given for its parts. While in northern Quebec, making notes for the Kanuck, the writer enlisted the interest of a fellow member of the Camp-Fire Club of America, Doctor Alexander Lambert, and through him secured the names of all parts of the Canadian shack.

The author is not a French-Canadian, and, although, like most of his readers, he studied French at school, what he learned of that great language is now securely locked up in one of the safe-deposit vaults of his brain and the key lost.

He owns up to his ignorance because he is a scout and would not try to deceive his readers, also because if the reader's knowledge of French enables him to find some error, the writer can sidestep the mistake and say, "'Tain't mine." But, joking aside, these names are the ones used in the Province of Quebec and are here given not because they are good French but because they are the names used by the builders among the natives known by the Indians as les habitants

Local Names of Parts of Cabin

The only thing that needs explanation is the squaring of the round logs of the cabin. For instance, instead of leaving the logs absolutely round and untouched inside the camp, after the logs are placed, they are squared off so as to leave a flat surface (Fig. 125). They call this the carréage. I do not know whether this is a local name or whether it is an expression peculiar to that Quebec section of Canada or whether it is simply a corruption of better French. It is derived from the word carrer, to square. 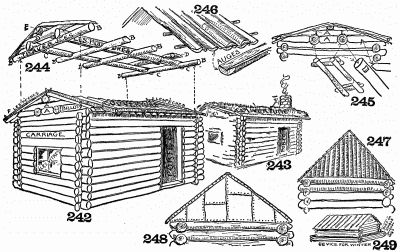 The perspective drawings (Figs. 242 and 243) show views of the cabin we call the Kanuck. The pen is built exactly as it is built in the houses already described. The windows are placed where the builder desires, as is also the doorway, but when the side-plate logs, that is

The roof is made of small logs flattened on the under-side or left in their rounded form (Fig. 242) and laid from the ridge logs down, extending over the eaves six or more inches.

The roof logs are then held in place by poles pegged with wooden pegs to the roof (F, G, Fig. 242).

The roof is now covered with a thick layer of browse, hay, straw, dry leaves, or dry grass, and on top of this moist blue clay, yellow clay, hard-pan, or simple mud is spread and trampled down hard, forcing the thatch underneath into all the cracks and crannies and forming a firm covering of clay several inches thick.

The fireplace and chimney may be built inside or outside the cabin, or the house may be heated by a stove and the stovepipe allowed to protrude through a hole in the roof large enough to separate the pipe a safe distance from the wood and straw and amply protected by a piece of sheet iron or tin. Then, after you have stored your butin (luggage), you can sit and sing:

When "l'habitant" hears you sing this verse he will not know what your song is about, but he will slap you on the back, laugh, and call you Bon Homme chez nous, but do not get mad at this; it is a compliment and not a bad name.

Fig. 247 shows a gable filled with upright logs and Fig. 248 shows a tar paper roof and a gable covered with tar paper.

Since Kanucks are cold-climate houses, they frequently have novel means of keeping them warm; one way that I have frequently seen used is to surround them with a log fence shown in Fig. 249, and pack the space between with stable manure or dirt and rotten leaves.