Shelters, Shacks, and Shanties > How to Use an Axe


How to Use an Axe

The old backwoodsmen were as expert with their axes as they were with their rifles and they were just as careful in the selection of these tools as they were in the selection of their arms. Many a time I have seen them pick up a "store" axe, sight along the handle, and then cast it contemptuously aside; they demanded of their axes that the cutting edge should be exactly in line with the point in the centre of the butt end of the handle. They also kept their axes so sharp that they could whittle with them like one can with a good jack-knife; furthermore, they allowed no one but themselves to use their own particular axe. In my log house in the mountains of Pike County, Pa., I have a table fashioned entirely with an axe; even the ends of the boards which form the top of the table were cut off by Siley Rosencranz with his trusty axe because he had no saw.

Both General Grant and Abraham Lincoln were expert axemen, and probably a number of other Presidents were also skilful in the use of this tool; but it is not expected that the modern vacation pioneer shall be an expert, consequently a few simple rules and suggestions will be here given to guide the amateur and he must depend upon his own judgment and common sense to work out the minor problems which will beset him in the use of this tool.

All edged tools are dangerous when in the hands of "chumps," dangerous to themselves and to any one else who is near them. For instance, only a chump will use an axe when its head is loose and is in danger of flying off the handle; only a chump will use his best axe to cut roots or sticks lying flat on the ground where he is liable to strike stones and other objects and take the edge off the blade. Only a chump will leave an axe lying around on the ground for people to stumble over; if there is a stump handy at your camp and you are through using the axe, strike the blade into the top of the stump and leave the axe sticking there, where it will be safe from injury.

Remember, before chopping down a tree or before using the axe at all, to see that there is enough space above and around you to enable you to swing the axe clear (Fig. 112) without the danger of striking bushes or overhanging branches which may deflect the blade and cause accidents more or less serious.

Do not stand behind a tree as it falls (Fig. 115), for the boughs may strike those of a standing tree, causing the butt to shoot back or "kick," and many a woodsman has lost his life from the kick of a falling tree. Before chopping a tree down, select the place where it is to fall, a place where it will not be liable to lodge in another tree on its way down. Do not try to fell a tree against the wind.

Cut a notch on the side of the tree facing the direction you wish it to fall (Fig. 113) and cut it half-way through the trunk. Make the notch, or kerf, large enough to avoid pinching your axe in it. If you discover that the notch is going to be too small, cut a new notch, X (Fig. 116), some inches above your first one, then split off the piece X, Y between the two notches, and again make the notch X, Z, and split off the piece Z, W, Y (Fig. 116), until you make room for the axe to continue your chopping. When the first kerf is finished begin another one on the opposite side of the tree a little higher than the first one (Fig. 114). When the wood between the two notches becomes too small to support the weight of the tree, the top of the tree will begin to tremble and waver and give you plenty of time to step to one side before it falls. 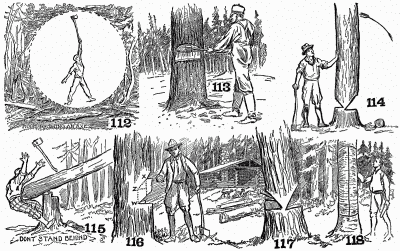 How to "fall" a tree and how to take off the bark.

If the tree (Fig. 117) is inclined in the opposite direction from which you wish it to fall, it is sometimes possible (Fig. 117) to block up the kerf on the inclined side and then by driving the wedge over the block force the tree to fall in the direction desired; but if the tree inclines too far this cannot be done.

There was a chestnut-tree standing close to my log house and leaning toward the building. Under ordinary circumstances felling this tree would cause it to strike the house with all the weight of its trunk and branches. When I told Siley Rosencranz I wanted that tree cut down he sighted up the tree, took a chew of tobacco, and walked away. For several days he went through the same performance, until at last one day he brought out his trusty axe and made the chips fly. Soon the chestnut was lying prone on the ground pointing away from the house. What this old backwoodsman did was to wait until a strong wind had sprung up, blowing in the direction that he wanted the tree to fall, and his skilful chopping with the aid of the wind placed the tree exactly where he wished it.

Fig. 118 shows how to make the cuts on a standing tree in order to remove the bark, which is done in the same manner as that described for removing the birch bark (Fig. 38).