Shelters, Shacks, and Shanties > How to Make Cabin Doors & Latches


How to Make Cabin Doors & Latches

Perhaps my reader has noticed that, although many of the descriptions of how to build the shacks, shanties, shelters, camps, sheds, tilts, and so forth are given with somewhat minute details, little or nothing has been said regarding the doors and door-latches. Of course we have no doors on the open Adirondack camp, but we have passed the open camps now and are well into cabin work, and all cabins have some sort of a door. All doors have, or should have, some sort of a door-latch, so the doors and door-latches have been saved for this place in the book, where they are sandwiched between the log cabin and the log houses proper, which is probably the best place for them. The "gummers" who collect spruce gum in the north woods and the trappers and all of the hermit class of woodsmen frequently come home to their little shack with their hands full of traps or with game on their shoulders, and consequently they want to have a door which may be opened without the necessity of dropping their load, and so they use a foot latch.

One of the simplest of the foot latches consists of a piece of wood cut out by the aid of axe and hunting-knife to the form shown by Fig. 199; a hole in the door cut for that purpose admits the flattened and notched end and upon the inside it fits the round log sill. The owner of the shack, when reaching home, steps upon the foot latch (Fig. 199), which lifts up the catch (on the inside) and allows the door to swing open.

Fig. 200 shows a more complicated form of latch with a trigger protruding from the lower part of the door, which is hinged to a wooden shaft, and the shaft in turn is connected with the latch. The fastenings of the trigger to the shaft and the shaft to the latch are made with hardwood pegs or wire nails which move freely in their sockets. The latch is the simplest form of a wooden bar fastened at one end with a screw or nail on which it can move up and down freely; the other end is allowed to drop into the catch. The latch itself is similar to the one shown in Figs. 193 and 194. The trigger is also fastened to a block on the outside of the door by a nail or peg upon which it moves freely, so that when the weight of the foot is placed upon the trigger outside the door that end is forced down which pushed the end attached to the shaft up; this pushes the shaft up and the shaft pushes the latch up; thus the door is unfastened. The diagram to the left in Fig. 200 shows the edge of the door with the trigger on the outside, the shaft upon the inside. The diagram to the right in Fig. 200 shows the inside of the door, the end of the trigger, the shaft, the latch, and the catch.

In the preceding locks and fastenings, no matter how generous and hospitable the owner may be, his latch-string never "hangs on the outside," but in this one the latch-string literally hangs outside and any one may enter by pulling it (Figs. 193 and 194). But when the owner is in and does not want to be interrupted he pulls the string in, which tells the outsider that he must knock before he can be admitted. This simplest form of latch has been here put upon the simplest form of a door, a door with a wooden hinge made by nailing a round rod to the edge of the door and allowing the ends of the rod to project above and below the door. In the sill log below the door a hole about two inches deep is bored to receive the short end of the hinge rod; above a deeper hole is bored to receive the long end of the hinge rod. To hang the door run the long end up in the top hole far enough to lift the door sufficiently to be able to drop the lower end of the hinge rod in the lower hole. Your door is then hung and may swing back and forth at your pleasure. Notwithstanding the fact that such a door admits plenty of cold air, it is a very popular door for camps and is even used for log houses. 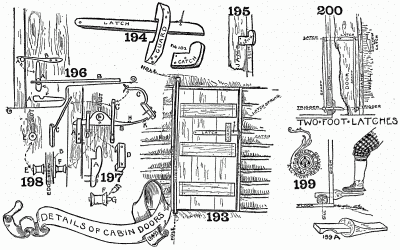 A simple form of spring-latch is shown by Fig. 196, as you may see, A is a peg driven into the door-jamb. It has a notch in it's outer end so that B, a piece of hickory, may be sprung into the notch; B is fastened to the door by a couple of screws. By pushing the door the latch will slide out of the rounded notch and the door opens. When you pull the door to close it the end of the spring strikes the rounded end of the A peg and, sliding over it, drops naturally into the slot and holds the door closed. This form of latch is also a good one for gates.

Figs. 197 and 198 show more complicated spring-latches but this latch is not so difficult to make as it may appear in the diagram. A and D (197) show, respectively, the wooden catch and the guard confining the latch. C is another guard made, as you may observe, from a twig with a branch upon it; the twig is split in half and fastened at the base with two screws, and at the upper end, where the branch is bent down, is fastened with one screw. A guard like the one shown by D (Fig. 197) would answer the purpose, but I am taking the latch as it was made. The lower diagram (Fig. 198) shows a side view of the edge of the door with two cotton spools fastened at each end of the stick which runs through a slot in the door. E is the cotton spool on the outside of the door and F the cotton spool on the inside of the door. The upper left-hand diagram (Fig. 198) shows the slot in the door and the spool as it appears from the outside. B (Fig. 197) is the spring-latch which is held in place by the spool F. The stick or peg which runs through the spools and the slot also runs through a hole made for that purpose in the spring-latch, as shown at F (Fig. 197). After the stick with the E spool on it has been run through the slot from the outside of the door, thence through the spring-latch B and into the spool F, it is fastened there by driving around its end some thin wedges of wood or by allowing it to protrude and running a small peg through the protruding end, as shown by F, G (Fig. 197, lower diagram). The thin, springy end of your latch is now forced down by a peg or nail in the door at H (Fig. 197) and the tail end of it forced up by a peg or nail at K. When this is done properly it will give considerable spring to the latch and impart a decided tendency to force the latch into the wooden catch, a tendency which can only be overcome by lifting the spool up in the slot and thus lifting the latch and allowing the door to open. Fig. 197 shows the inside of the door with the spring-latch, catches and all complete; it also gives details of the wooden catch A with guards D and C and the fastening of the stick in the spool by a peg driven through the end of the stick at F, G. This last one is a good jack-knife latch to make for your camp or cabin.