Shelters, Shacks, and Shanties > How to Cut and Notch Logs


How to Cut and Notch Logs

HOW TO CUT AND NOTCH LOGS

Boys you have now passed through the grammar school of shack making, you are older than you were when you began, you have acquired more skill and more muscle, and it is time to begin to handle the woodsman's axe, to handle it skilfully and to use it as a tool with which to fashion anything from a table to a two-story house. None of you is too young to learn to use the axe. General Grant, George Washington, Abraham Lincoln, Billy Sunday—all of them could wield an axe by the time they were eight or nine years old and do it without chopping off their toes or splitting any one else's head open. Remember that every time you hurt yourself with an axe I have a yellow ribbon for you to wear as a "chump mark"; but, joking aside, we must now get down to serious work of preparing the logs in order to build us a little cabin of our own, a log club-house for our gang, or a log camp for our troop of scouts.

To make the logs hold together at the corners of our cabins it is necessary to lock them in some manner, and the usual way is to notch them. You may cut flat notches like those shown in Fig. 162 and this will hold the logs together, as shown by 162 E or you may only flatten the ends, making the General Putnam joint shown in Fig. 163. This is called after General Putnam because the log cabins at his old camp near my farm at Redding, Conn., are made in this manner. Or you may use the Pike notch which has a wedge-shaped cut on the lower log, as shown by Fig. 164 J, made to fit into a triangular notch shown by 164 H. When fitted together these logs look like the sketch marked 164 F which was drawn from a cabin built in this manner.

But the simplest notch is the rounded one shown by A, B, and C (Fig. 165). When these are locked together they will fit like those shown at Fig. 165 D.

Away up North the people dovetail the ends of the logs (Fig. 166) so that their ends fit snugly together and are also securely locked by their dovetail shape. To build a log house, place the two sill logs on the ground or on the foundation made for them, then two other logs across them, as shown in Fig. 168.

That the logs may be more easily handled they should be piled up on a skidway which is made by resting the top ends of a number of poles upon a big log or some other sort of elevation and their lower ends upon the ground. With this arrangement the logs may be rolled off without much trouble as they are used.

A log cabin built with hardwood logs or with pitch-pine logs can seldom be made as tight as one built with the straight spruce logs of the virgin forests. The latter will lie as close as the ones shown in Fig. 162 E, while the former, on account of their unevenness, will have large cracks between them like those shown in Fig. 165 D. These cracks may be stopped up by quartering small pieces of timber (Y and W, Fig. 168½) and fitting these quartered pieces into the cracks between the logs where they are held by spikes. This is called "chinking the cabin." 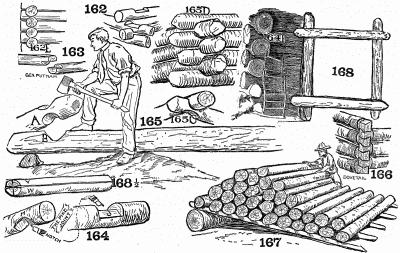 Showing how the logs are notched.

To keep the cold and wind out, the cracks may be "mudded" up on the inside with clay or ordinary lime mortar.

Study these diagrams carefully, then sit down on the ground with a pile of little sticks alongside of you and a sharp jack-knife in your hand and proceed to experiment by building miniature log cabins. Really, this is the best way to plan a large cabin if you intend to erect one. From your model you can see at a glance just how to divide your cabin up into rooms, where you want to place the fireplace, windows, and doors; and I would advise you always to make a small model before building. Make the model about one foot three inches long by ten inches wide, using sticks for logs a little less than one inch in diameter—that is, one inch through or one inch thick. I have taken these dimensions or measurements from a little model that I have before me here in my studio, but, of course, you can vary them according to the plans of your cabin.