Shelters, Shacks, and Shanties > How to Make a Concealed Log Cabin Inside a Modern House


How to Make a Concealed Log Cabin Inside a Modern House

It was because the writer knew that a great many men and all the boys rebelled against the conventionalities and restrictions of a modern house that he first invented and suggested the surprise den and told how to make one years ago in the Outing magazine. Since that article appeared the idea has been adopted by a number of people. There is a beautiful one in Toledo, O., where the writer was entertained during the floods, and Doctor Root, of Hartford, Conn., has even a better one in his home in that Yankee city. Fig. 308 shows a rough sketch of a corner of Doctor Root's surprise den which he calls his "loggery."

From the outside of the house there is no indication of anything upon the inside that may not be found in any conventional dwelling, which is the proper way to build the surprise den.

Figs. 307, 309, and 310 are sketches made as suggestions to those wishing to add the surprise den to their dwelling.

To fathers and mothers having sons anywhere from twelve to thirty years of age, it is almost a necessity nowadays to give these boys a room of their own, popularly known as the "den," a retreat where they can go and sit in a chair without having fancy embroidered tidies adhere to their coat collars, where they can lean back in their chairs, if they choose, with no danger of ruining the valuable Hepplewhite or breaking the claw feet off a rare Chippendale—a place where they can relax. The greater the contrast between this room and the rest of the house, the greater will be the enjoyment derived by the boys to whom it belongs. The only two surprise dens which I have personally visited are the pride of the lives of two gentlemen who are both long past the years generally accorded to youth, but both of them are still boys in their hearts. The truth is a surprise den appeals to any man with romance in his soul; and the more grand, stately, and formal his house may be, the greater will the contrast be and the greater the surprise of this den. It is a unique idea and makes a delightful smoking-room for the gentlemen of the house as well as a den for the boys of the house. 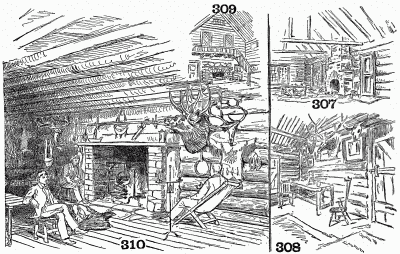 If the reader's house is already built, the surprise den may be erected as an addition; it may be built as a log cabin after the manner of any of those previously described in this book, or it may be made an imitation log cabin by using slabs and nailing them on the walls in place of real whole logs. Doctor Root's surprise den, or "loggery," is made of whole logs and chinked with moss. Fig. 310 is supposed to be made of slabs, half logs, or puncheons nailed to the walls and ceiling and so arranged that the visitor cannot detect the deception. Personally, however, I do not like deception of any sort and would recommend that the house be made, if possible, of whole logs; but whatever way you build it, remember that it must have a generous, wide fireplace, a crane, and a good hearthstone, and that your furniture must either be made of the material to be found in the woods or selected from the antique furniture of some old farmhouse, not mahogany furniture, but Windsor chairs, three-legged stools, and deal-wood tables—such furniture as might be found in an old pioneer's home. 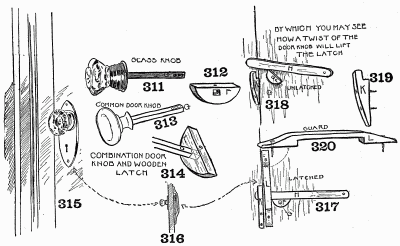 After some experiments I discovered that this could be easily arranged by cutting a half-round piece of hardwood (F, Fig. 312) to fit upon the square end G of the knob (Figs. 311 and 313) and be held in place with a small screw (Fig. 314). When this arrangement is made for the door and the knob put in place as it is in Figs. 315 and 316, a simple wooden latch (Fig. 317) with the catch K (Fig. 319) and the guard (Fig. 320) may be fastened upon the den side of the door as shown by K, L, (Fig. 317). When the door is latched the wooden piece F fits underneath the latch as shown by Fig. 317. When the knob is turned, it turns the half disk and lifts the latch H as shown in Fig. 318; this, of course, opens the door, and the visitor is struck with amazement upon being ushered into a pioneer backwoods log cabin, where after-dinner coffee may be served, where the gentlemen may retire to smoke their cigars, where the master of the house may retire, free from the noise of the children, to go over his accounts, write his private letters, or simply sit before the fire and rest his tired brain by watching the smoke go up the chimney. 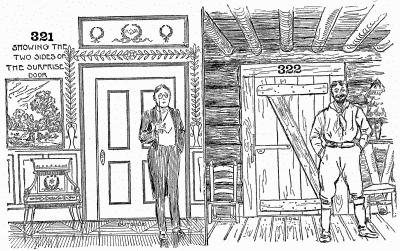 The "surprise den." A log house inside a modern mansion.

Here also, over the open fire, fish, game, and chickens may be cooked, as our grandams and granddaddies cooked them, and quaint, old-fashioned luncheons and suppers served on earthenware or tin dishes, camp style. In truth, the surprise den possesses so many charming possibilities that it is destined to be an adjunct to almost every modern home. It can be enclosed within the walls of a city house, a suburban house, or added as a wing to a country house, but in all cases the outside of the surprise den should conform in material used and general appearance to the rest of the house so as not to betray the secret.