Shelters, Shacks, and Shanties > The Building of the Log House

How a Forty-Foot-Front, Two-Story Pioneer Log House Was Put Up with the Help of "Backwoods Farmers"—Making Plans with a Pocket Knife.

Our log house on the shore of Big Tink Pond, Pike County, Pa., was built long before the general public had been educated to enjoy the subtle charms of wild nature, at a time when nature-study was confined to scientists and children, and long before it was fashionable to have wild fowl on one's lawn and wild flowers in one's garden. At that time only a few unconventional souls spent their vacations out of sight of summer hotels, camping on the mountain or forest trails. The present state of the public mind in regard to outdoor life has only been developed within the last few years, and when I first announced my intention of hunting up some accessible wild corner and there erecting a log house for a summer studio and home I found only unsympathetic listeners. But I was young and rash at that time, and without any previous experience in building or the aid of books to guide me and with only such help as I could find among backwoods farmers I built a forty-foot-front, two-story log house that is probably the pioneer among log houses erected by city men for summer homes. It gave Mr. Charles Wingate the suggestions from which he evolved Twilight Park in the Catskills. Twilight Park, being the resort of literary people and their friends, did much to popularize log houses with city people.

The deserted farms of New England offer charming possibilities for those whose taste is for nature with a shave, hair cut, and store clothes, but for lovers of untamed nature the waste lands offer stronger inducements for summer-vacation days, and there is no building which fits so naturally in a wild landscape as a good, old-fashioned log cabin. It looks as if it really belonged there and not like a windfall from some passing whirlwind.

When I make the claim that any ordinary man can build himself a summer home, I do not mean to say that he will not make blunders and plenty of them; only fools never make mistakes, wise men profit by them, and the reader may profit by mine, for there is no lack of them in our log house at Big Tink. But the house still stands on the bank overlooking the lake and is practically as sound as it was when the last spike was driven, twenty-seven years ago.

Almost all of the original log cabins that were once sprinkled through the eastern part of our country disappeared with the advent of the saw-mill, and the few which still exist in the northern part of the country east of the Alleghany Mountains would not be recognized as log houses by the casual observer, for the picturesque log exteriors have been concealed by a covering of clapboards.

To my surprise I discovered that even among the old mountaineers I could find none who had ever attended a log-rolling frolic or participated in the erection of a real log house. Most of these old fellows, however, could remember living in such houses in their youth, but they could not understand why any sane man of to-day wanted "to waste so much good lumber," and in the quaint old American dialect still preserved in these regions they explained the wastefulness of my plans and pointed out to me the number of good planks which might be sawed from each log. 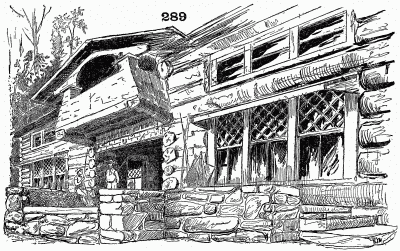 Fig. 290, B, shows the plans of the house, which will be seen to be a modification of the Southern "saddle-bag" cabin—two houses under one roof. By referring to Fig. 289 it will be seen that above the gallery there is a portico, which we called the "afterthought" because it did not appear upon the original plans. We got the hint, as "Jimmy" called it, when it was noticed that chance had ordained that the two "A" logs should protrude much farther than the others. "Don't saw them off," I exclaimed; "we will have a balcony"; and so the two "A" logs were left, and this gave us room for a balcony over the gallery, back of which is a ten-by-ten bedroom, while the two large bedrooms on each side have doors opening on the six-foot passageway, which is made still broader by the addition of the balcony.

It will be seen that there is a stairway marked out on the ground plan, but there was none on the original plan, for, to tell the honest truth, I did not know where to put the stairs until the logs were in place. However, it is just such problems that lend charm to the work of building your own house. An architect or a professional builder would have the thing all cut and dried beforehand and leave nothing to chance and inspiration; this takes the whole charm out of the work when one is building for recreation and the pleasure to be derived from the occupation.

When our house was finished we had no shutters to the windows and no way of closing up the open ends of the gallery, and my helpers told me that I must not leave the house that way because stray cattle would use the house for a stable and break the windows with their horns as they swung their heads to drive away the flies. So we nailed boards over these openings when we closed the house for the winter. Later we invented some shutters (see C, Fig. 290) which can be put up with little trouble and in a few moments. Fig. 290, C, shows how these shutters are put in place and locked on the inside by a movable sill that is slid up against the bottom of the shutters and fastened in place by iron pins let into holes bored for the purpose. 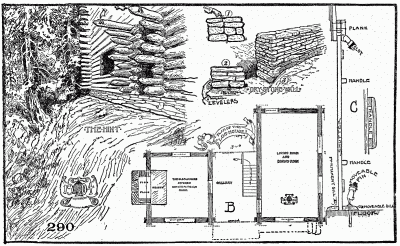 Of course, this forms no bar to a professional burglar, but there is nothing inside to tempt cracksmen, and these professional men seldom stray into the woods. The shutters serve to keep out cattle, small boys, and stray fishermen whose idle curiosity might tempt them to meddle with the contents of a house less securely fastened.

A house is never really finished until one loses interest in it and stops tinkering and planning homely improvements. This sort of work is a healthy, wholesome occupation and just the kind necessary to people of sedentary occupations or those whose misfortune it is to be engaged in some of the nerve-racking business peculiar to life in big cities.

Dwellers in our big cities do not seem to realize that there is any other life possible for them than a continuous nightmare existence amid monstrous buildings, noisy traffic, and the tainted air of unsanitary streets. They seem to have forgotten that the same sun that in summer scorches the towering masonry and paved sidewalks until the canyon-like streets become unbearable also shines on green woods, tumbling waters, and mirror-like lakes; or, if they are dimly conscious of this fact, they think such places are so far distant as to be practically out of their reach in every sense. Yet in reality the wilderness is almost knocking at our doors, for within one hundred miles of New York bears, spotted wildcats, and timid deer live unconfined in their primitive wild condition. Fish caught in the streams can be cooked for dinner in New York the same day.

In 1887, when the writer was himself a bachelor, he went out into the wilderness on the shores of Big Tink Pond, upon which he built the log house shown in the sketch. At first he kept bachelor hall there with some choice spirits, not the kind you find in bottles on the bar-room shelf, but the human kind who love the outdoor world and nature, or he took his parents and near relatives with him for a vacation in the woods. Like all sensible men, in course of time he married, and then he took his bride out to the cabin in the woods. At length the time came when he found it necessary to shoulder his axe and go to the woods to secure material for a new piece of furniture. He cut the young chestnut-trees, peeled them, and with them constructed a crib; and every year for the last eight years that crib has been occupied part of the season. Thus, you see, a camp of this kind becomes hallowed with the most sacred of human memories and becomes a joy not only to the builder thereof but also to the coming generation. At the big, open fire in the grill-room, with the old-fashioned cooking utensils gathered from farmhouses on Long Island, I have cooked venison steaks, tenderloin of the great northern hare, the plump, white breasts of the ruffed grouse, all broiled over the hot coals with slices of bacon, and when done to a turn, placed in a big platter with fresh butter and served to a crowd who watched the operation and sniffed the delicious odor until they literally drooled at the corners of their mouths. As the house was built on a deer runway, all these things were products of the surrounding country, and on several occasions they have all been served at one meal.