Shelters, Shacks, and Shanties > How to make the Bow-Arrow Cabin Door, The Deming Twin Bolts, Hall, and Billy


How to make the Bow-Arrow Cabin Door, The Deming Twin Bolts, Hall, and Billy

Fig. 209 shows the inside of the door with the wooden latch in place. You may use planks from the sawmill for the door in place of splitting them from spruce logs, as the ones here are supposed to be.

The guard (Fig. J, 216) fits over the bolt and keeps it in place. The notch in the guard must be long enough to give the bolt free play up and down.

The spring (Fig. G, 209) is fastened with a nail to the door in such a manner that its thin end rests upon the top of the bolt with sufficient force to bend the spring and hold the bolt down in the catch (Fig. K, 215).

Fig. 217 shows the outside of the door and you can see that by pressing down the thumb-latch on the outside it will lift it up on the inside, and with it the bolt lifts up the free end of the latch and thus unfastens the door.

E. W. Deming, the painter of Indian pictures, the mighty hunter, and fellow member of the Camp-Fire Club of America, is a great woodsman. Not only is he a great woodsman but he is the father of twins, and so we have thought that he possesses all the characteristics necessary to entitle him to a place in this book, and after him and his twins we have named the twin bolts shown by Fig. 208.

The lower or Hall bolt is shot into a hole in the door-sill, and the upper or Billy bolt is shot into a hole in the door-jamb above the door. The holes should be protected upon the surface of the wood by pieces of tin or sheet iron with holes cut in them to admit the bolt. The tins may be tacked over the bolt-hole in the sill for the Hall bolt and on the bolt-hole overhead for the Billy bolt, and it will prevent the splitting away of the wood around the holes.

Two guards, A and B (Fig. 208), made as in Fig. 216, protect the bolts and act as guides to keep them from swinging out of position; two springs C and D (Fig. 208), made of well-seasoned hickory and attached to the battens on the door by nails or screws, force the bolts down and up into the bolt-holes (Fig. 208). To release the bolts, the spring must be drawn back as shown by the dotted lines in Fig. 208. This may be done by means of a string or picture wire, which is fastened in the ends of the bolts and runs through a hole in the ends of the spring and is attached to the lever E (Fig. 208). When the end of this lever is pushed down into the position shown by the dotted line and arrow-point, it lifts up the Hall bolt at the bottom of the door and pulls down the Billy bolt overhead, thus unfastening the door. 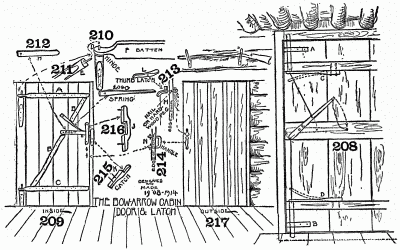 But, of course, if one is outside the door one cannot reach the lever E; so, to overcome this difficulty, a hole is bored through the central batten of the door and the latch-string is tied to the top end of the lever and the other end is run through the hole bored in the door (Fig. 208).

The end outside of the door is then tied to a nail; by pulling the nail you pull down the lever E, which undoes the bolts and opens the door.

When it is desired to leave the door locked, after it is closed, push the nail into the latch-string hole so that only the head will be visible from the outside. When the nail and string are arranged in this manner, a stranger will see no means of opening the door, and, as there are many nail-heads in all rough doors, the one to which the latch-string is attached will not attract the attention of any one who is unacquainted with the Deming twin bolt.