Now that we know how to wield the axe we can begin on more ambitious structures than those preceding. We may now build camps in which we use logs instead of poles. Most of these camps are intended to be covered with sod or earth and are nearly related to the old prairie dugout. The sod house is used in the arctic regions because it is warm inside, and it is used in the arid regions because it is cool inside. You will note that the principle on which the Stefansson is constructed (Fig. 135) is practically the same as that of the Pontiac (Fig. 36); the Stefansson frame, however, is made of larger timbers than the Pontiac because it not only must support a roof and side of logs and sod but must also be able to sustain any quantity of snow.

First erect two forked upright sticks (Fig. 132), and then steady them by two braces. Next lay four more logs or sticks for the side-plates with their butt ends on the ridge-pole and their small ends on the ground as in Fig. 133. Support these logs by a number of small uprights—as many as may be necessary for the purpose. The uprights may have forks at the top or have the top ends cut wedge-shaped to fit in notches made for that purpose in the side-plates as shown by Fig. 133 A. The shortest uprights at the end of the roof should be forked so that the projecting fork will tend to keep the roof logs from sliding down. The roof is made by a number of straight rafters placed one with the butt in front, next with the butt in the rear alternately, so that they will fit snugly together until the whole roof is covered. The sides are made by setting a number of sticks in a trench and slanting them against the roof; both sides, front, and rear of the building should project six inches above the roof in order to hold the sod and dirt and keep it from sliding off. 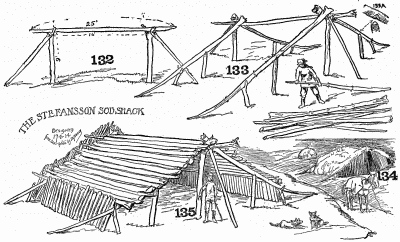 Details of the Stefansson sod shack.

Up in the north country one must not expect to find green, closely cropped lawns or even green fields of wild sod in all places. Although in some parts the grass grows taller than a man's head, in other places the sod is only called so by courtesy; it really consists of scraggy grass thinly distributed on gravelly and sandy, loose soil, and consequently we must secure the sod by having the walls project a little above the rafters all around the building. Of course, in summer weather this roof will leak, but then one may live in a tent; but when cold weather comes and the sod is frozen hard and banked up with snow the Stefansson makes a good, warm dwelling.

The same style of a camp can be made in the temperate zone of smaller trees and shingled with browse, or in the South of cane or bamboo and shingled with palmetto leaves, or in the Southwest of cottonwood where it may be covered with adobe or mud. Fig. 134 shows a Stefansson shack roofed with sod. The front is left uncovered to show its construction and also to show how the doorway is made by simply leaving an opening like that in a tent. In winter this may have a hallway built like the one described in the Navajo earth lodge (Fig. 35) or in the Pawnee hogan (Figs. 42 and 43), and in milder weather the doorway may be protected with a skin. An opening is left in the roof over the fireplace, which answers the purpose of a chimney.

The author aims to take hints from all the primitive dwellings which may be of service to outdoor people; the last one described was arbitrarily named the Stefansson because that explorer built himself such shelters in the far North, but he did not invent them. He borrowed the general plan from the natives of the northern country and adapted it to his use, thereby placing the official stamp on this shack as a useful building for outdoor people and, consequently, as deserving a place in this book.