The door shows the two strings H and K coming through gimlet holes near the top. Fig. 218 represents the outside of the door. The strings may be concealed by covering their ends with a board as shown in this diagram, but even if they are not concealed, one unacquainted with the lock will not know how to work them in order to open the door.

A in Figs. 219, 220, and 221 is the latch which is made of a piece of wood about eight or nine inches long by about one and one half inches wide by an inch or three quarters of an inch thick. A hole is drilled near the centre of the latch and a screw placed through which is screwed into the door so that the latch will extend about two or three inches beyond the end of the door.

B (Fig. 219) is the key which is made of the same sort of wood as the latch; a hole is drilled in this also but it is here placed about one inch from the top. A screw is run through this, as in the hole in the latch, and screwed into the door (Fig. 219).

Fig. C, 219 is a small block of wood on which a steel-band spring has been screwed to keep the key in its proper place. The block is screwed to the door a short distance above the top of the key.

Fig. J, 219 is a nail or peg placed in the door close beside the key when the key is vertical; this is intended to prevent the key from being shoved over too far by the force of the band spring F.

Fig. 219 L is a steel wire spring (a window-shade spring will answer the purpose), fastened to the door at one end and to the latch at the other end, and serves to keep the latch down and in place when locked.

When leaving the room, all that is necessary is to pull the key string which lifts the key, then let go the latch-string, and the latch will spring back to its locked position and the key will also fly back into its position as in Fig. 219. Any one not knowing the combination will be unable to open the door. 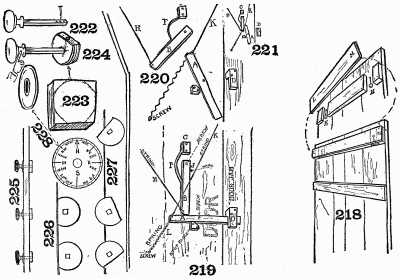 This lock is made on the same principle as the combination safe lock, but it is a lock any bright boy can make for himself. In the first place, instead of numbers, use compass divisions; that is, use a disk with the points of the compass scratched on it and an ordinary door-knob with an index mark filed on its base, as shown by Fig. 224 where the finger is pointing.

Hunt up three old door-knobs like those shown in Figs. 222, 224, and 225. When you take one of the door-knobs off one end of the shaft you will find several small screw holes in the steel shaft (Fig. 222). Over this end you set a block of hardwood which you fashion out of a square block (Fig. 223) by first cutting off the corners as shown by the dotted lines, then whittling the angles off until it becomes rounded like a compass face; after which saw off an arc, that is, part of a circle, as shown in Figs. 224, 226, and 227. Next make a square hole through the centre of the circle to fit the square end of the steel shaft of the door-knob. The square hole is not the centre of the block as it is now cut, but it is the centre of the block as it was when it was round; that is, the centre of the circle. Insert the square end of the steel shaft into the square hole in the block, and, through a hole carefully drilled for the purpose, put a screw down through the hole in the end of the steel shaft (Fig. 224); this will firmly fix the block on the end of the knob. Of course, the knob must be inserted through the door before the block is permanently fastened upon the end of the shaft. Fig. 225 shows the edge of the door with the three knobs in place. If these knobs are so turned (Fig. 226) that their flat edges are parallel with the crack of the door, there is nothing to prevent you from opening the door; but if the knobs are so turned (Fig. 227) that the blocks overlap the crack of the door, the door cannot be opened without breaking the lock.

It is evident that we must have some sort of a mark to tell us how to make the proper combination so that the door may be opened. To do this, take the metal washer of the door-knob (the upper figure in Fig. 228) or a circular piece or disk of tin and divide it up like a compass (Fig. 228). Fasten these disks securely on to the door with nails or screws; place all of the disks with the north point pointing to the top of the door and in line with each other. File in the circular base of each door-knob (Fig. 224) a little notch at the black mark where the finger is pointing, then put the door-knobs in place and fasten them there (Fig. 225) by screwing the block on their ends (Fig. 224) and securing the screws in the blocks by running them through the shaft. Carefully turn the knobs so that the block on the inside fits like those shown in Fig. 226. Jot down in your notebook the position of the index on each knob (finger point, 224); one may read northeast, another may read southwest, and another may read south. When one wants to open the door one must turn the knobs so that they will read according to the notes and the door may be opened; but unless the indexes read as noted some of them will be turned as in Fig. 227, locking the door, and it may not be opened.

When the door is closed, twist the knobs around and it will lock them so that no one else can open the door unless they know the combination. The fact that there is a combination will not be suggested to a stranger by the compasses, although it might be suggested if there were figures in place of compass points. But even supposing they did suspect a combination it would take a long time for them to work it out, and no one would do it but a thief. A burglar, however, would not take the time; he would pry open the door with his "jimmy" and, as I have said before, these locks are for the purpose of keeping out tramps, vagrants, and inquisitive boys.

We have no locks yet invented which will keep out a real, professional burglar if he has reason to suppose there are valuables inside.

The safety of your log cabin depends principally upon the fact that valuables are not kept in such shacks, and real burglars know it.