Shelters, Shacks, and Shanties > How to Build an American Boy's Hogan


How to Build an American Boy's Hogan

The first time any working plans of an underground house for boys were published was when an article by the present writer on the subject appeared in the Ladies' Home Journal. Afterward it was published with a lot of similar material in "The Jack of All Trades." Since then other writers have not hesitated to use the author's sketches with very little alteration; imitation is the sincerest compliment, although it is not always fair, but it does, however, show the popularity of the underground-house idea.

The American boy's hogan may be built like the preceding shacks of the material found in the woods or it may be constructed of old boards and waste material to be found in village back yards or on the farm, or, if the boys have the price or if they can interest their fathers or uncles in their scheme, it may be built of milled lumber procured at the lumber-yard.

Procure some good, sound planks and some pieces of two by four with which to build your frame. The hogan should be large enough to allow room for a table made of a packing-case, some benches, stools, or chairs, and the ceilings should be high enough for the tallest boy to stand erect without bumping his head.

One funny thing about this house is that it must be furnished before it is built, because the doorway and passageway will be too small to admit any furniture larger than a stool. Select or make your furniture and have it ready, then decide upon the location of your hogan, which should be, like the Western dugouts, on the edge of some bank (Fig. 158). In this diagram the dotted line shows how the bank originally sloped.

The real hard work connected with this is the digging of the foundation; one Y. M. C. A. man started to build one of these hogans, but he "weakened" before he had the foundation dug. He wrote the author a long letter complaining of the hard work; at the same time the author was receiving letters from boys telling how much fun they had in building and finishing their underground houses.

Ever since "Robinson Crusoe" and "Swiss Family Robinson" were written cave houses have been particularly attractive to boys; no doubt they were just as attractive before these books were written, and that may be the reason the books themselves are so popular; at any rate, when the author was a small boy he was always searching for natural caves, or trying to dig them for himself, and so were all of his companions. One of the most charming features of the "Tom Sawyer" and "Huckleberry Finn" stories is that part connected with the cave. 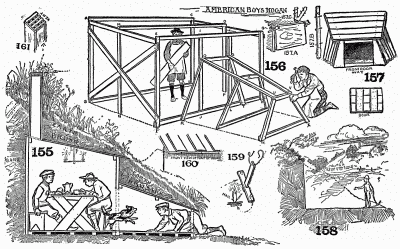 The trouble is that with caves which the boys dig for themselves there is always serious danger of the roof falling in and smothering the young troglodytes, but a properly built underground hogan is perfectly safe from such accidents.

After you have levelled off the foundation erect the rear posts of two-by-fours A, B and C, D (Fig. 156). These posts should be of the same height and tall enough to allow the roof to slant toward the front as in Fig. 155. The front posts E, F and G, H, although shorter than the back posts, should be tall enough to allow headroom. One, two, or three more posts may be erected between the post A, B and the post C, D if additional strength is required. The same is true of the sides, and in place of having only one post in the middle of each side (M, N and O, P, Fig. 156), there may be two or three posts, all according to the size of the house you are building; the main point is to make a compact and strong box of your framework so that in the wet weather the banks surrounding it will not be tempted to push in the sides and spoil your house.

Locust, chestnut, and cedar will last longer than other varieties of wood when exposed to contact with damp earth, but common wood, which rots easily, may be protected by preservatives, one of which is boiled linseed-oil with pulverized charcoal stirred into it until a black paint is produced. Some people say that a coat of charcoal paint will preserve even a basswood fence post for a lifetime, and if that is true a hogan protected by a coating upon the outside of paint made by stirring fine charcoal into boiled linseed-oil until it is as thick as paint will last longer than any of my readers will have occasion to use the hogan for a playhouse. Erect the frame (Fig. 156) by having some boys hold the uprights in place until they can be secured with temporary braces like those shown running diagonally across from B to E and A to F. You may then proceed to board up the sides from the outside of the frame by slipping the planks between the frame and the bank and then nailing from the inside wherever you lack room upon the outside to swing your hammer. The door-jambs I, J and K, L will help support the roof.

If you wish to make the roof as the cliff-dwellers made theirs, put your biggest logs crosswise from A, M, E to C, O, G of your house for rafters, and across the larger logs lay a lot of small poles as close together as may be, running from the back to the front of the house. Fill in the cracks between with moss or calk them with dry grass; on them place a layer of brush, browse, or small sticks and over this a thick coating of clay, hard-pan, or ordinary mud and pack it down hard by tramping it with your feet until it becomes a smooth and tightly packed crust; over this you can put your sod and weeds to conceal your secret.

To make the frame for the underground hall or passageway (Fig. 156), first nail Q, S across the door-jambs to form the top to the doorway, after which put in the supports Q, R and S, T. Next build the frame U, V, X, W and join it to Q, S by the two pieces Q, U and S, V and put in the middle frame support marked ZZZZ.

The passageway should be about six feet long and the front doorway (U, V, X, W, Figs. 156 and 157) of sufficient size to enable you to creep through with comfort. The bottom piece W, X can be nailed to a couple of sticks driven in the ground for that purpose. The next thing in order is the floor, and to make this firm you must lay a number of two-by-fours parallel to B, D and F, H and see that they are level. You will need a number of shorter pieces of the same material to run parallel to F, H and W, X for the hall floor, as may be seen in Fig. 157. Across these nail your floor securely as shown in Fig. 155.

There are no windows shown in the diagram, but if the builders wish one it can be placed immediately over the entrance or hallway in the frame marked I, K, Q, S (Fig. 156), in which case the top covering of dirt must be shovelled away from it to admit the light in the same manner that it is in the dugout shown in Fig. 142 and also in the small sketch (Fig. 154). The ventilator shown in Fig. 155 may be replaced, if thought desirable, by a chimney for an open fire. On account of the need of ventilation a stove would not be the proper thing for an underground house, but an open fire would help the ventilation. In the diagram the ventilator is set over a square hole in the roof; it may be made of a barrel or barrels, with the heads knocked out, placed over the hole in the roof, or kegs, according to the size of the roof. When your house is complete fill in the dirt around the edges, pack it down good and hard by the use of a piece of scantling two by four or four by four as a rammer, then cover the roof with small sticks and fine brush and sod it with growing weeds or grass.

You should have a good, stout front door (Fig. 157) and a padlock with which to secure it from trespassers.

A rustic hinge may be made by splitting a forked branch (Fig. 157 C) and using the two pieces nailed to the sides of the door-jambs (Fig. 157 A) to hold the round ends of the rod (Fig. 157 B) run through them. The middle of the B stick is flattened to fit on the surface of the door to which it is nailed. This hinge was invented by Scout Victor Aures of stockade 41144 of Boy Pioneers of America and a description with neat diagrams sent by the inventor to his chief. When all is completed you can conceal the ventilator with dry brush or by planting weeds or shrubs around it, which will not interfere with the ventilation but will conceal the suspicious-looking pipe protruding from the ground. The top of the ventilator should be protected by slats, as in Fig. 161, or by wire netting with about one-quarter-inch mesh in order to keep small animals from jumping or hopping down into your club-house. Of course, a few toads and frogs, field-mice and chipmunks, or even some lizards and harmless snakes would not frighten any real boy, but at the same time they do not want any such creatures living in the same house with them.

In place of a ventilator or chimney a trap-door may be placed in the roof and used as a secret entrance, access to inside being had by a ladder. A description of an appropriate ladder follows (Figs. 169 and 170).

Fig. 159 shows a rude way to make a chandelier, and as long as your candles burn brightly you may know that the air in your little hogan is pure and fresh. When such a chandelier is used pieces of tin should be nailed above the candles to prevent the heat from burning holes through the roof.