The next shelter is what is generally known as the Adirondack shelter, which is a lean-to open in the front like a "Baker" or a "Dan Beard" tent. Although it is popularly called the Adirondack camp, it antedates the time when the Adirondacks were first used as a fashionable resort. Daniel Boone was wont to make such a camp in the forests of Kentucky. The lean-to or Adirondack camp is easily made and very popular. Sometimes two of them are built facing each other with an open space between for the camp-fire. But the usual manner is to set up two uprights as in Fig. 15, then lay a crosspiece through the crotches and rest poles against this crosspiece (Fig. 16). Over these poles other poles are laid horizontally and the roof thatched with browse by the method shown by Fig. 6, but here the tips of the browse must point down and be held in place by other poles (Fig. 10) on top of it. Sometimes a log is put at the bottom of the slanting poles and sometimes more logs are placed as shown in Figs. 15 and 16 and the space between them floored with balsam or browse.

Where birch bark is obtainable it is shingled with slabs of this bark as already described, and as shown in Fig. 17, the bark being held in place on the roof by poles laid over it and on the side by stakes being driven in the ground outside of the bark to hold it in place as in Fig. 17. 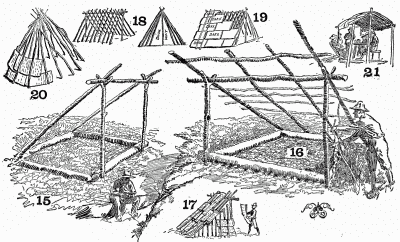 The Adirondack. The scout, the pioneer, and the bark teepee.

Fig. 18 shows the Pioneer, a tent form of shack, and Fig. 19 shows how the bark is placed like shingles overlapping each other so as to shed the rain. The doorway of the tent shack is made by leaning poles against forked sticks, their butts forming a semicircle in front, or rather the arc of a circle, and by bracing them against the forked stick fore and aft they add stability to the structure.

Commence at the bottom as you do in shingling a roof and place sections of birch bark around, others above them overlapping them, and hold them in place by resting poles against them. If your camp is to be occupied for a week or so, it may be convenient to build a wick-up shelter as a dining-room like the one shown in Fig. 21. This is made with six uprights, two to hold the ridge-pole and two to hold the eaves, and may be shingled over with browse or birch, elm, spruce, or other bark; shingle with the browse in the same manner as that described for the bark, beginning at the eaves and allowing each row of browse to overlap the butts of the one below it.