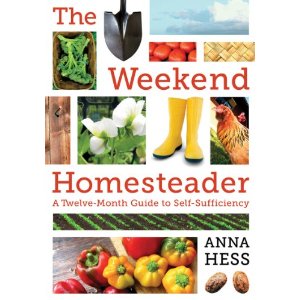 The Weekend Homestead by Anna Hess is a compendium of a variety of homesteading tips, tricks, and tasks. It is arranged, in a relatively unique fashion, by month of the year. Though obviously some tasks can be done at times other than where they’re listed, and it isn’t applicable for all climates.

Ms. Hess is a blogger and I congratulate her on a book deal but ultimately I feel as though the book feels like a blog given physical form. She touches on a wide variety of topics, and if you were a complete neophyte to self sufficiency or homesteading I might recommend it, but the book tends to be a jack of all trades and a master of none. On most topics it goes into little depth. I found it about as fulfilling as an article at eHow. Chances are, if you pick up the book, you already know the shallow information about all these topics and what you really need is depth, but depth is not provided.

Sometimes she goes off on tangents about budgeting or finances, and while the advice might work for her, it isn’t as universal as she may have made it seem. She blurs the line between fact and opinion on those topics somewhat, and comes off as less of an expert. When she sticks to her knitting, homesteading, she does better.

All told, the book feels like a bunch of blog posts printed out and stapled together. Rather than buy a book one could just read a blog or participate in a forum community. Beginners looking for a simple read to familiarize themselves with a wide variety of topics quicky would do well to get the book, most others I think can pass.

Body armor, aka a bullet proof vest, is something you probably don’t need, probably. But if you did suddenly need it you’re not likely to want to be without it. 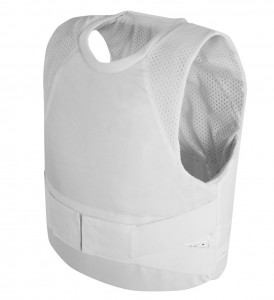 You don’t necessarily need someone who wants to kill you to need it.  Many people who need bullet proof vest for their work will be issued it by their employer, but not all. Your employer may feel your life isn’t at risk but you simply may not agree. Professionals such as lawyers and doctors can be threatened. Lawyers who defend criminals make obvious targets, but I have known doctors in city hospitals to find themselves in the middle of gang fights that can spill over into the ER after wounded from the first round at taken there, not to mention psychiatrists who work with the mentally unstable or anyone who might have narcotics store in his office.  People who regularly care for or transport valuables such as jeweler or gold assayer may also feel the need, or someone who works in a pawnshop.

Outside of work I think it’d make sense to wear a vest when hunting. People die every year from hunting accidents, it absolutely cannot hurt. I also think, next to a locked shotgun, we could also stand to have a bullet proof vest in every school. A lunatic gunman could strike anywhere, and we can’t go through life being paranoid, but this is relatively cheap insurance. Even if you worked in an office, having one beneath your seat in your cubicle could save your life one day. Remember too it doesn’t just stop bullets, but also knives and other sharp projectiles, which could strike you out of malice or the result even of just an accident. If you work in any sort of dangerous job where you wear a hard hat, a lightweight vest might be called for.

Of course, if you’re here reading this you likely have already come up with a reason why you’d want a vest.

Safeguard’s stealth vest weighs in at 5 pounds and I found it very light and comfortable to wear. I got a size large, and am 6’5 with a 42″ chest and 31″ waist, it fit me fine around. The protection completely covered my rib cage though it ended at my bottom rib, leaving my belly and lower back bare. I’ve worn chainmail armor as a costume at time and that clocks in at 30 pounds, so in contrast this 5 pound vest was barely noticeable.

SafeGuard’s stealth line is meant to be, well, stealthy, meaning you can easily hide it under clothes, and I definitely noticed this to be the case here. There isn’t much padding up around the shoulders so it doesn’t look bulky under even a button down shirt. At most it will make your chest look a little larger, which isn’t a bad thing certainly. 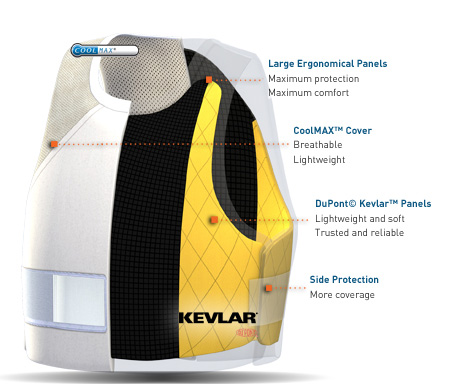 Of course, the ultimate review is on how it works. So I put an ad for a volunteer on craigslist. No one responded, I cannot imagine why. I’d love to be able to tell you that I was wearing this and it stopped a 9mm bullet and saved my life, but I can’t. I suppose I could deck a watermelon man out and go out and ruin it but that wouldn’t be a good test. Kevlar works on a body, and not by stopping damage, but by stopping penetration, you’ll still get blunt force trauma as it hit by a baseball bat. So the watermelons would get destroyed. I lack the sort of ballistics dummies needed to do a real test, and I don’t think I’d want to mess up the nice vest I got anyways. So, for now, I think we’ll have to take it on faith that the kevlar inside will work.

Depending on size and selections it is available for about $500 direct from the manufacturer.